Alternative title: If it's not Scottish, it's crap.

We knew it would be cold, but I had not counted on the complete lack of sun. Dark until after 8 AM, dark at 5 PM...even when the sun was up, it was so low in the sky, that it felt like it was 5PM all day. Every picture I took in Dunedin is filled with shadows. Here's Nico in front of the train station at midday. 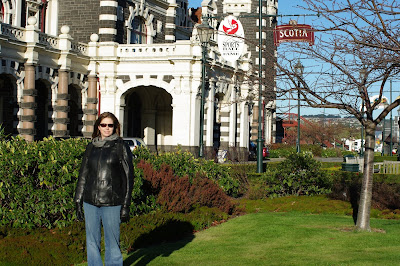 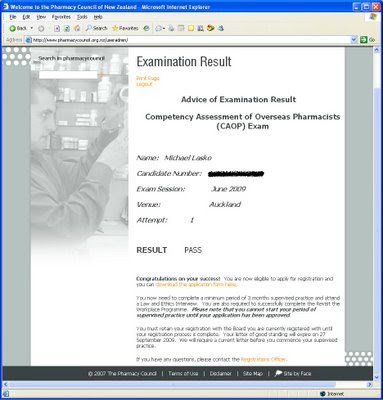 I must admit, I have never studied more for anything than I did for this exam. Not the California boards, and certainly not Hawaii. (At the time, one had to travel to NoCal to take the California test...Hawaii I took in Irvine). Something about the 12 hour flight to Auckland must have done something to motivate me.
Posted by Michael Lasko at 6/22/2009 01:28:00 PM 4 comments:

Favorite thing we did on the last NZ trip: Climbing Mount Maunganui (in the rain). I'm using the term "climbing" loosely. It's really more of a walking thing. The top of the mountain was in a cloud, but the views from halfway up were incredible...even in the rain. The resident sheep were somewhere between disinterested and happy to pose for photos. 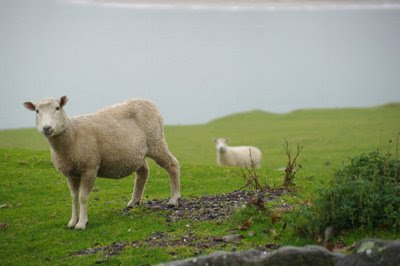 Nicole says I took too many pictures of sheep. Hopefully, the 8 Aussies we met while staying at Lanarch Castle (in Dunedin, not Mount Maunganui), will not be viewing my blog. Over dinner, one of them told us his favorite Kiwi joke:

An Australian farmer was visiting a New Zealand farm. In the back paddock, he comes across the New Zealand farmer screwing a sheep. The Aussie yells, "Hey Mate--in my country we sheer our sheep!" The NZ farmer yells back, "GET STUFFED!! I'm not sharing this sheep with anybody!!!"

PS: This joke is at least a little funnier if you are aware that Aussies and Kiwis claim they cannot understand each other (due to the different accents).
Posted by Michael Lasko at 6/15/2009 04:46:00 PM No comments:

Alternative title: If I bought the place, I would probably tell my mother it's pronounced as a "W". 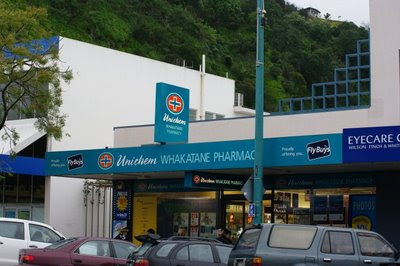 Just back from New Zealand reconnaissance mission. If you don't hear from me for a while, it's because I have swine flu.

Although smaller in scope than the last trip , there is still too much to write about at once. And I'm sick, jet-lagged, and hungry. So let's start with Whakatane.

Yes indeed, "wh" is pronounced as "f" in Maori. Go ahead, say Whakatane...it's fun. It was raining, so we didn't do much while we were there. The town reminded me of something you'd see in Hawaii...and they have an active (offshore volcano). That's all I know. 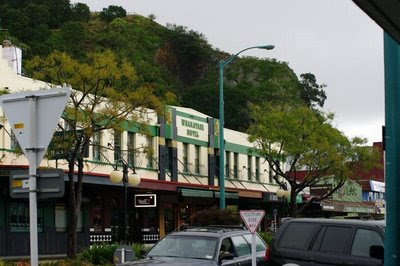