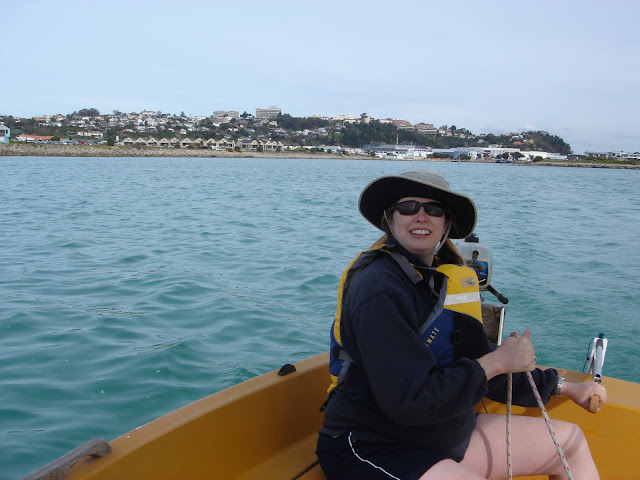 Now that spring is in the air

I really should be posting a little more about New Caledonia, but I thought I would first let all of my Northern Hemisphere friends know that it is no longer freezing down here.

Here is a rather giant Nicole looking like she remembers how to sail. This picture reminds me of my first Napier post (about 6 months before we first visited Napier). 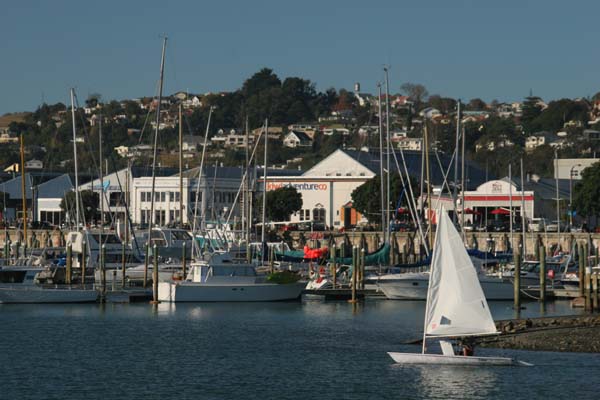 I have a vague recollection of telling people I was going to live on this hill. We ended up pretty close: the hill in the second picture is to the right of Nicole's head...we live to the left of Nicole's head. [Sadly, the house is not visible from the water, but it's right by the abandoned hospital at the top of the hill.]

Back to New Caledonia: I don't think I've posted anything about Noumea yet. My favourite thing to do in Noumea was: sitting and staring out the window. 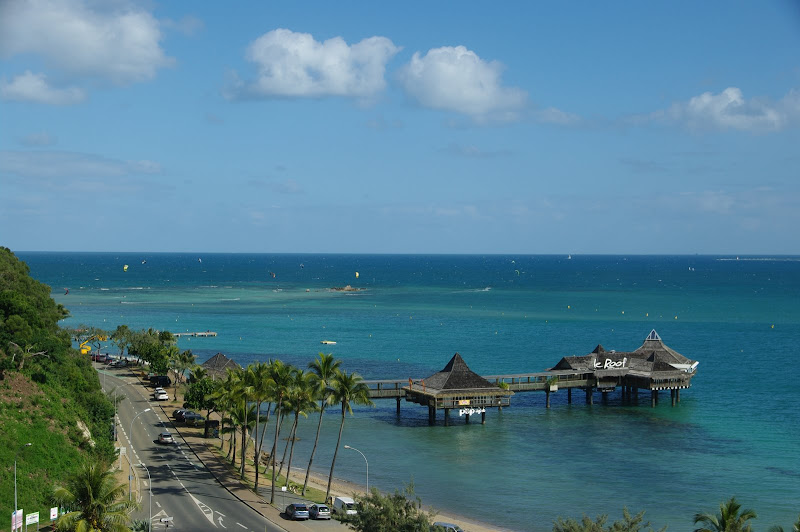 One of the better views we've ever had from a hotel room. Sadly, I dropped my camera shortly after that photo was taken, so the picture quality will be going down from here.

A rather neat war memorial...and there's a McDonalds right beside it. 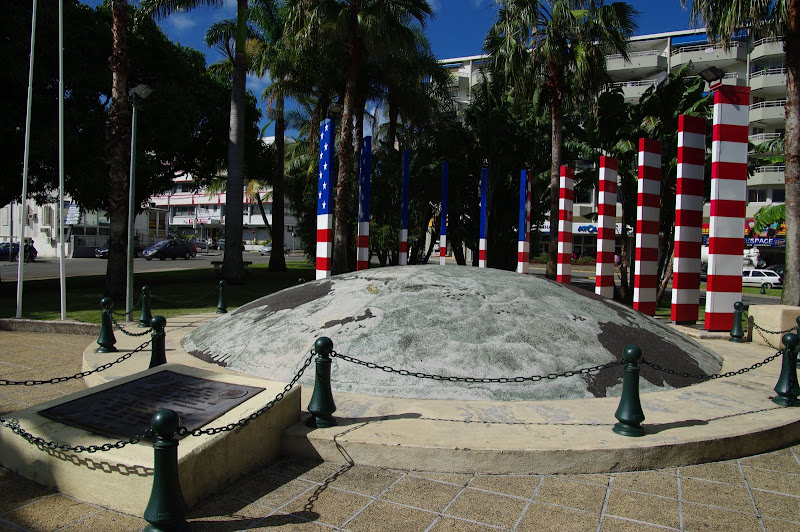 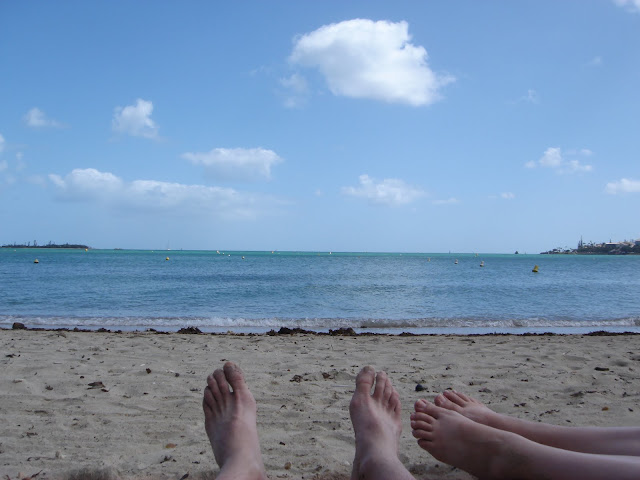 Here we are laying on the beach...we did a fair amount of this. 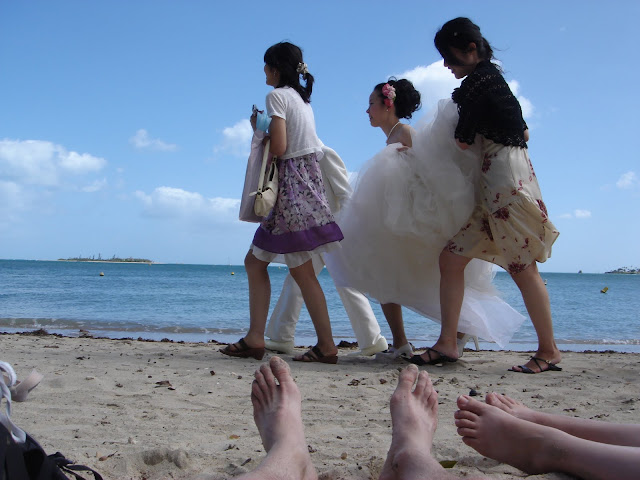 Here we are laying on the beach watching a wedding procession go by. (That only happened once.) 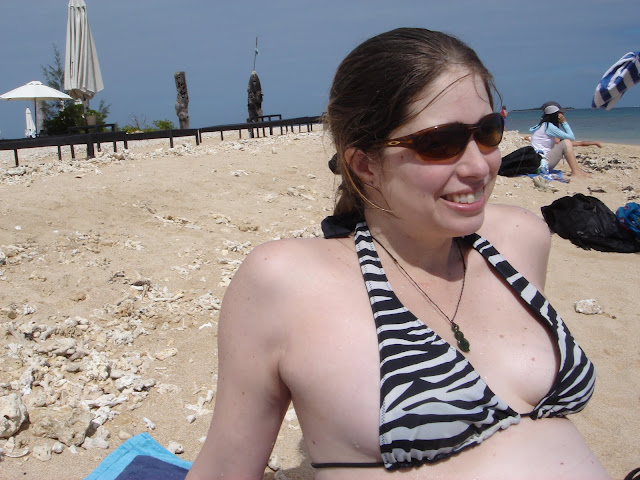 After we got bored of the Noumea beaches, we took a water taxi over to Ile Aux Canards (one of the many small offshore islands). Here's Nicole in a bikini. Ile Aux Canards has a neat underwater walkway, where we did our only snorkelling. The water was a little cold, but as long as I kept moving, I was able to stave off hypothermia. I would have some really cool photos, except I forgot the water proof case for the Sony. 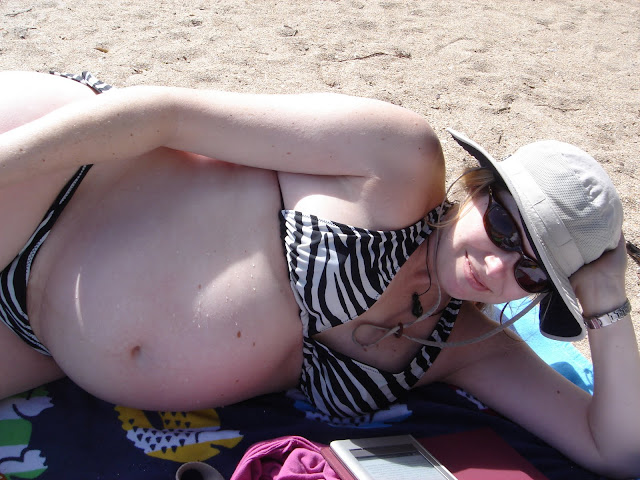 Since I haven't gotten in trouble yet... 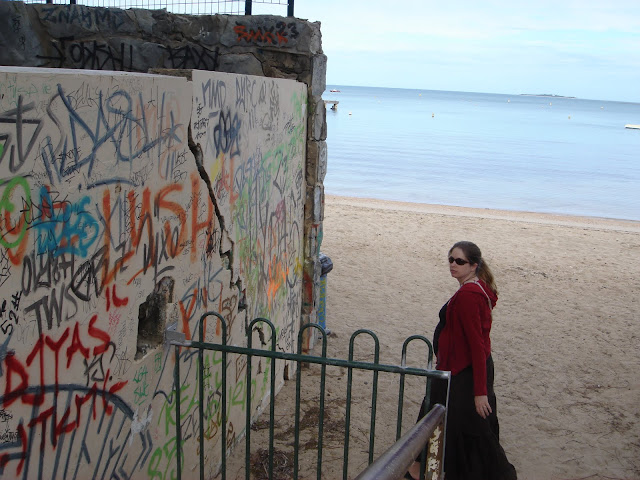 Should I mention: There is graffiti everywhere in New Caledonia. This is the entrance way to one of the nicer Noumea beaches. 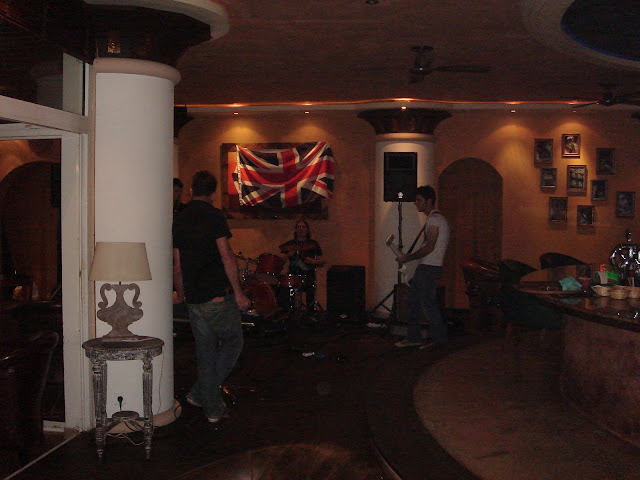 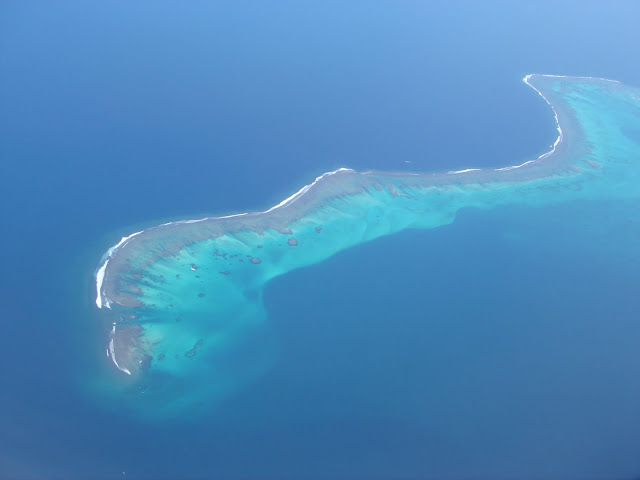 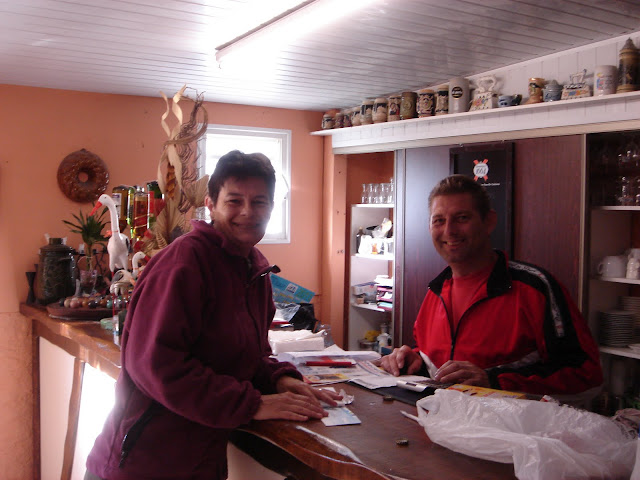 Interesting thing about New Caledonia: Everyone speaks English. Even the people who don't speak English try to speak English. We had a waiter who asked if we would like a translation of the menu (it was a tapas bar; the menu a mix of French/Spanish, so we were mostly okay with it); we assumed he meant an English menu, and we're surprised when he read through the entire menu in his best English (making bleating sounds because he did not know the word for lamb). 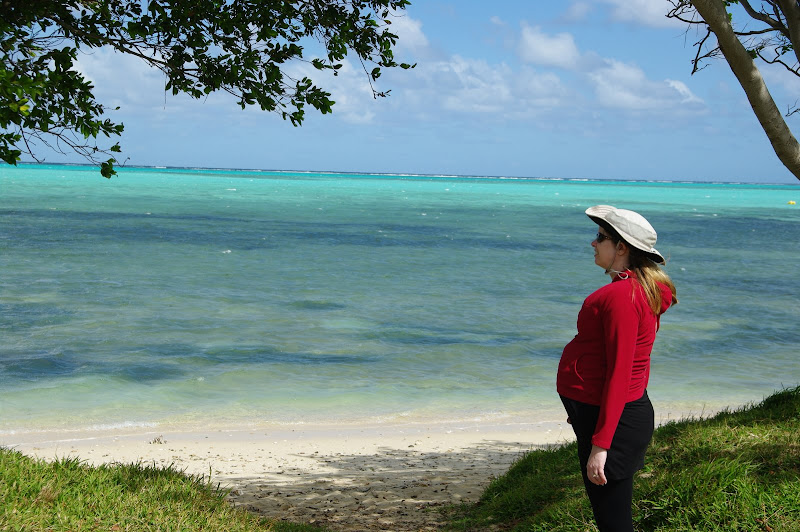 Outside Noumea is another story. We spent two nights in the [former prison] town of Bourail. Our hosts Marion (spoke enough English to show us our room and sort of tell us what was for dinner) and Philippe (spoke only enough English to express disappointment that I could not converse with him in German) were quite welcoming at their little B&B a few km past town. At Dinner (a bargain at 3200 XPF for a drink, more food than you would ever want to eat, dessert and coffee) we sat at a large table of non-English speakers. I found the experience a good deal more enjoyable than Nicole (one would think she should be able to speak French and/or German)...probably because she was not allowed to partake of any of the French wines on offer. I can also tell you that at no time did I understand 80% of any conversation at the table. 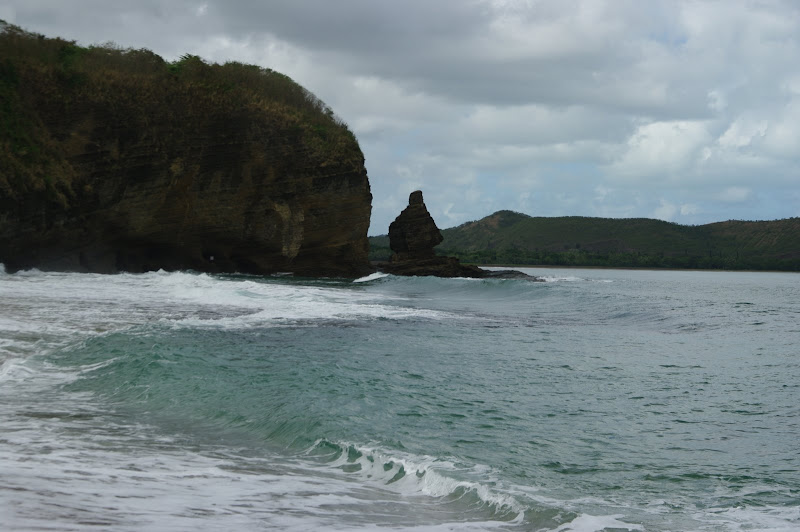 Later in our trip, I realized that I can pick up almost no spoken French, but if something is written down, I do pretty well.

There is a lot to do in Bourail...but with a big giant Nicole, your options are more limited. Bourail is known for 1) having the only surfable beach on the "mainland" and 2) some interesting rock formations. 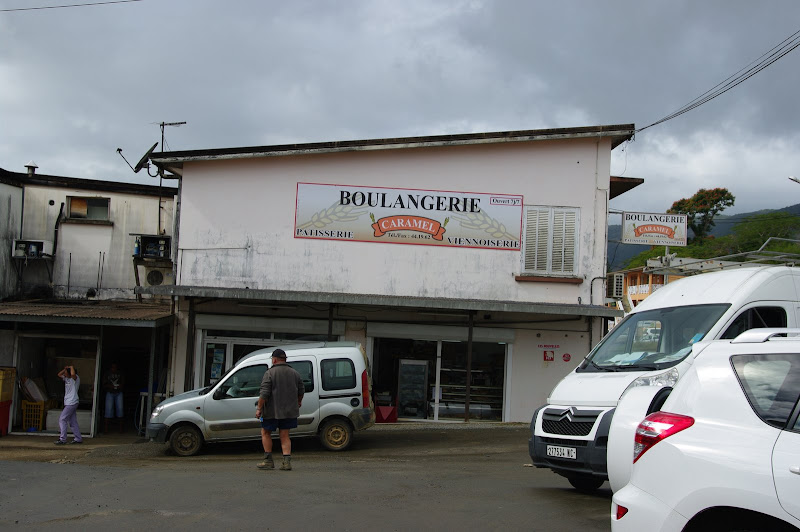 The actual town of Bourail is not much to look at. Nicole used the words "failed colonialism" to describe it. I thought it looked a lot like Disneyland's New Orleans square if they stopped maintaining it for 50 years. This is a quaint little bakery, and it is remarkably devoid of graffiti. 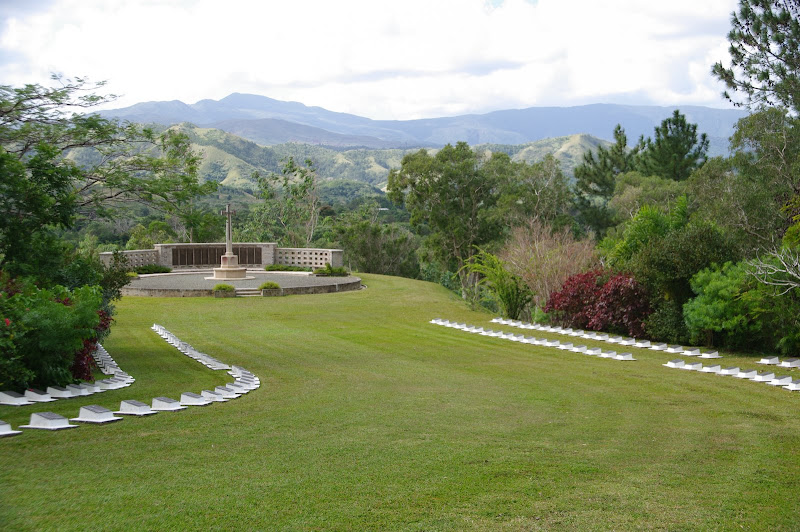 I thought I might start off with something useful

When arriving in New Caledonia, the expensiveness begins almost immediately: Tontouta International Airport is 45 km outside of Noumea. There are about 30 shuttle operators, each will want somewhere around 3000 Pacific Francs (XPF) to get you to Noumea; some might give you a little discount for two people (say 5000 XPF). [The Pacific Franc is used in New Caledonia and French Polynesia. It is pegged to the Euro at an exchange rate of 120 XPF per Euro. If you're bored, you should read about the history of why New Caledonia doesn't just use the Euro.] Anyway, 5000 XPF is about $60 (US) at today's exchange rate. In retrospect, that does not look very expensive, but it's quite a bit more in Kiwibucks, and Nico and I are but poor Kiwi folk.

But I digress. To delay the expensiveness a little, exchange a few dollars at the currency exchange at the airport. [Or use the ATM if you have a good American bank that does not make this prohibitive.] Then avoid the private shuttles and hop on the public bus (Carsud). I could find almost no web presence for Carsud, so I was a little afraid they were no longer in business. Fortunately, they are still running, and pick up at the airport every 30 minutes (roughly between 6:00 AM and 6:00 PM--don't quote me on that, but there are only like 3 planes that land/take off from Tontouta, and they are all well within normal bus hours). To get to Noumea, you will want line C (or C express, which has fewer stops, but still has so many you will wonder why it's called express). It's a 70 minute trip to Noumea (at a bargain price of 400 XPF per person). 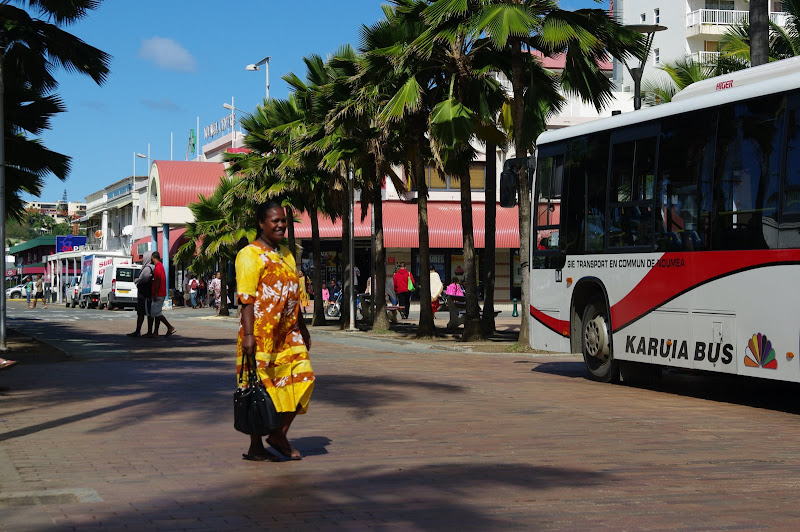 And unless you are staying in downtown Noumea, you will then have to catch a city bus to your destination. The city buses are quite easy to figure out, even if you speak as little French as I do. The airport bus will drop you off in the vicinity of Avenue Paul Doumer and Ru Du General Gallieni; you can then catch either a green line or yellow line bus to get to Anse Vata (where most of the resorts are). City buses are 210 XPF; 190 XPF if you buy your ticket in advance. There's a bus station office somewhere, but the only place I saw people buying tickets was from a machine in Place Des Cocotiers.

So that's how you save 4800 XPF during your first hour in New Caledonia.