First Quad Tandem Tour
A little before the toursists came back, we woke up early packed up the bike and set off for Kaanapali. In our prime, this would have been a very easy tandem ride, but with a few years, a couple of kids, a super heavy bicycle, and 30 pounds of gear, I was a little concerned. Note to self: I will never honk my horn through that tunnel again.
If you're looking for somewhere to stay with your 13+ foot long bicycle. I'd recommend the Marriott Maui Ocean Club. They have a covered surfboard rack that they offered to us (which I assume is usually available) or an indoor locked hallway (that's probably used for luggage storage when there are actual tourists on the island). The reception desk clerk also upgraded us by about 5 room categories.
Close to nothing was open in Kaanapali, so we rode into Lahaina two or three times to eat.
The ride home was considerably worse than the ride there. The late morning crosswind/headwind didn't help. We were so exhausted that we had to stop 2 miles from home to rest. 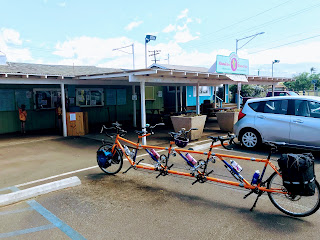 Way back in high school, I used to have a job selling speakers. Most of the speakers I sold weren’t exactly great, but after a year or two in the business, I had put together a pretty decent sound system (particularly for a teenager). The speakers and aging components made several cross-country (and at least one international) move(s) with me, but were eventually replaced with a 5.1 home theater in a box. Technology had advanced and I must have decided that both the space and financial commitments would have been too much to upgrade to a modern AV setup that actually sounded good.

An unexpected and unfortunate side effect of the cheap 5.1 system was that my music routine changed significantly. Specifically, I mostly stopped listening because everything sounded unpleasant. Even more unfortunate, I did not notice this had happened until 10 or 15 years later when I made a somewhat extravagant coronavirus lockdown purchase. I won't bore everyone with the details, but this subwoofer would have gotten me kicked out of any apartment in which I used to reside.

And on to one of the numerous problems the 2020s have presented: My music collection was previously contained in a 300 disc changer, which replaced an older 100 disc changer that kept getting stuck every time disc 67 came up (if memory serves, it was a Red Hot Chili Peppers album). This was high-tech in 1998, but stopped working sometime around 2016. I had made a couple of half hearted attempts at ripping everything, but never got very far. Although I have used Pandora as background music for years, paying for streaming music seemed almost obscene. I went through several free Spotify trials, one of which caused me to lose a free Hulu subscription. I tried Tidal, because what's not to like about master recordings? [I used to collect Mobile Fidelity records of music I didn’t even like because they were supposed to sound better.] But the Tidal interface is terrible and their highest quality recordings will not play through my receiver without a lot of extra equipment. I'm currently on Amazon Music. Overall it seems to work, and my nine year old can play Taylor Swift in her room without disturbing what’s happening in the rest of the house. 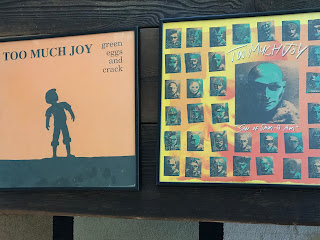 I'm now on month five with the new setup. I would say it's been almost life changing. Definitely life altering. We’ve had music going in the family room fairly non-stop. The music of my youth; music my parents listened to; music my grandparents might have enjoyed; and quite a bit of music that I never would have bothered listening to, but figured would sound good on this stereo. Which finally brings me to the reason I started writing this post: Tim Quirk’s Five Star Songs. He was the front man for one of my favorite bands in high school and college. Nico and I once drove from Indianapolis to Chicago and back, possibly on a week night to see them at the Empty Bottle. I passed up a $200 offer for an out of print record while I was a starving student because I figured I would never find another copy. And come to think of it, I stole the name of this blog from one of their songs. Tim Quirk must have started posting about his favorite songs 4 or 5 years ago. I paid occasional attention, usually thinking "I should listen to more Pavement" or "How have I never heard of a band called Ted Leo and the Pharmacists?" I rarely played a song when it came up in my feed as I would usually be at work and never have headphones on my person. Anyway, the search for new tunes made me think an Amazon playlist of Tim's songs would be a worthwhile expenditure of my time.

Let me now spend a few sentences complaining about the Amazon Music app: It might be better than Tidal's, but it's still horrible. If you're looking for obscure music (as much of this playlist is), it's either not there, or very difficult to find. A single mistyped letter results in nothing returned (I can't tell you how many times I accidentally wrote Camper Can Beethoven or Camper Van Beerthoven). Compilation Albums (which is much of the soul I was able to find) are almost invariably attributed to "Various Artists". After a few hundred songs, I would cheer when I was able to find a song on the first try without googling anything or reversing the title and the artist or searching for the artist and then scrolling through 200 songs. I almost cried when Amazon matched "Shed" up to Henry Wallace Shead, Sr. (AKA Shed). I found myself going to greater lengths to find hard to locate songs if the descriptions made it sound warranted. I spent a solid 20 minutes on Padraic Morrell because my family had a similar experience in an Irish pub a couple of years ago (or maybe pubs is more accurate).

I seriously doubt I would have attempted creating this playlist had I realized how long it takes to add 1200 songs on Amazon (I only found 989 of them). If you've read this far, you deserve this link.