Afternoon walk around the Tainui Reserve

Please seek out Nico's blog for a differential diagnosis of Parks, Domains and Reserves in the NZ. Nico does not get a link yet...as some of you may recall, the requirements for a link to your site (from takealotofdrugs.com) are ALL of the following:

1) You must apply in writing

and ONE of the following

[For those of you who do not work at Prescription Solutions, this is a sort of funny Prior Authorizations joke. Of course, if you have to explain a joke...]

We live over at this end...it's more of a park over here. 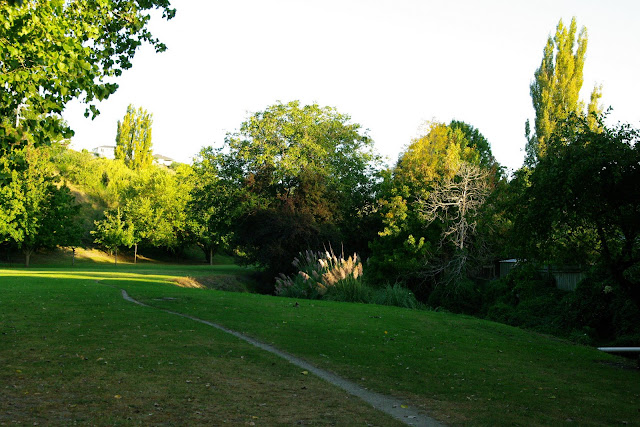 And just a short hike into the reserve, and things start looking foresty. 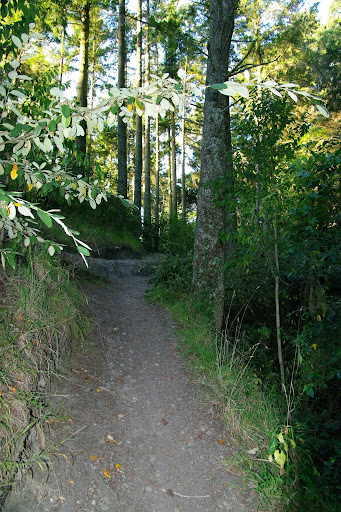 A grape by any other name

A little rain today, so instead of mowing the lawn, we set off in search of zinfandel. Kemblefield Estate Winery claims to be the first (and now one of two) wineries in the NZ growing zinfandel. 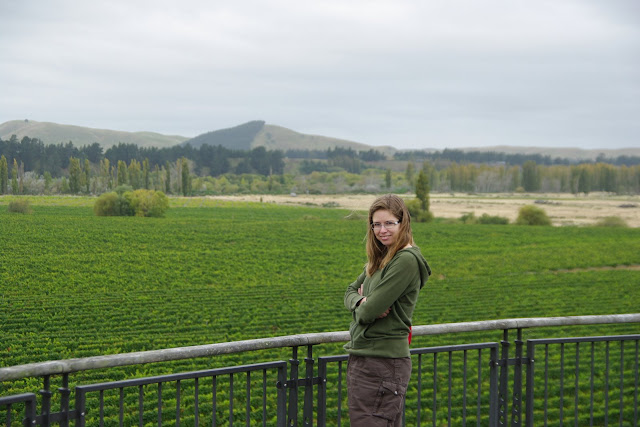 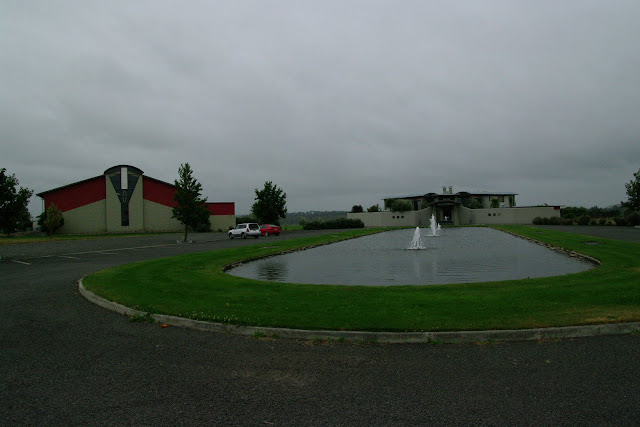 The zinfandel they were pouring was not quite recognizable as zinfandel, though a few of their other wines were quite good. We hope to return when they are tasting the (much more expensive) reserve zinfandel. 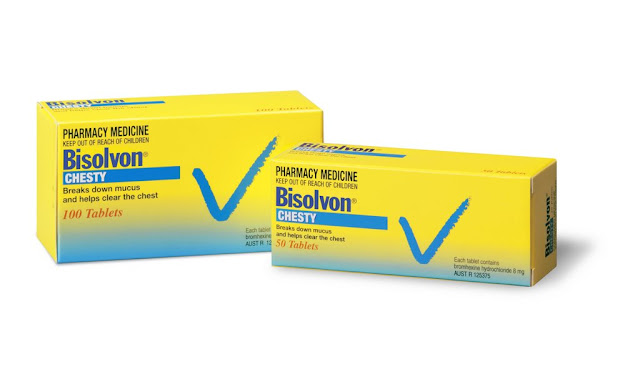 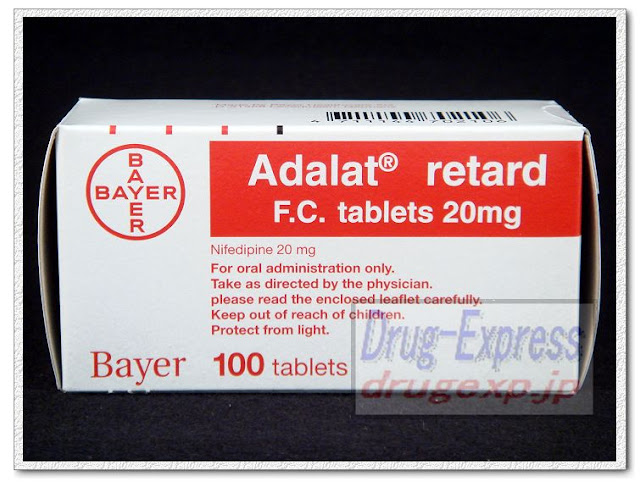 It might take a year, but I'm attempting to revive our garden. I'm allowing myself to buy equipment that we can take with us (eg: a lawn mover), but no consumables (like grass seed)...unless they are very cheap or absolute necessities.

Most of the lawn that is growing are (sic?) weeds, but I figure that if I water them at least it will be green...cut short, it might look like grass. Not sure what I'll do with the open patches of dirt. Speaking of water, I am really wishing I had brought my $8 Wal-Mart hose. New Zealand is 50 years behind the US in hose technology; fortunately, the previous tenant left a couple, so I don't need to shell out $30 for a narrow rubber tube...that's right, just a tube. You need to purchase additional hardware to attach your tube to anything else...I am guessing that these attachments will not stay on if you turn the pressure above a trickle. 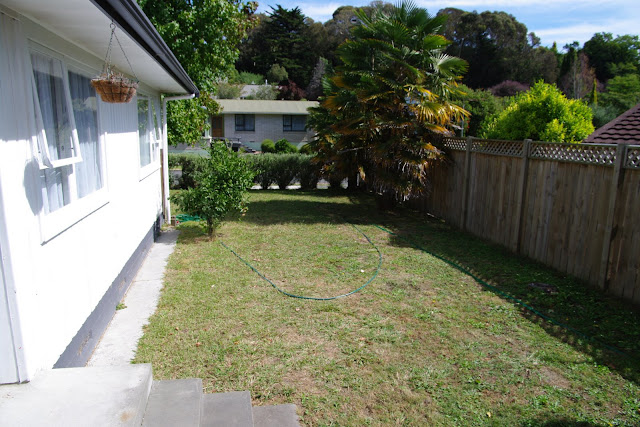 Not sure what kind of trees are in the wine barrels. I'm going to plant peppers in the empty one, and there's a dying tomato plant in another. 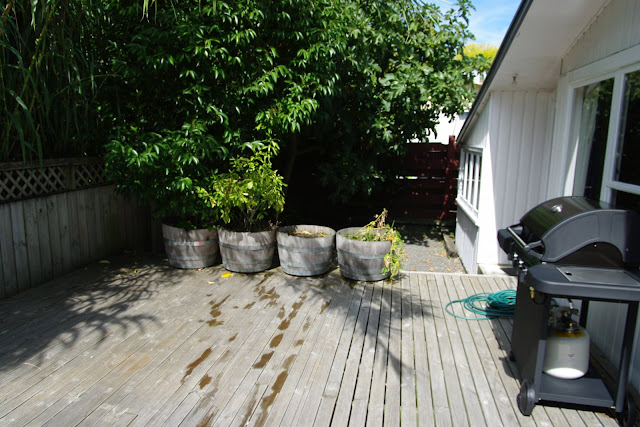 A little raking of the zen garden, and my chi should be restored. 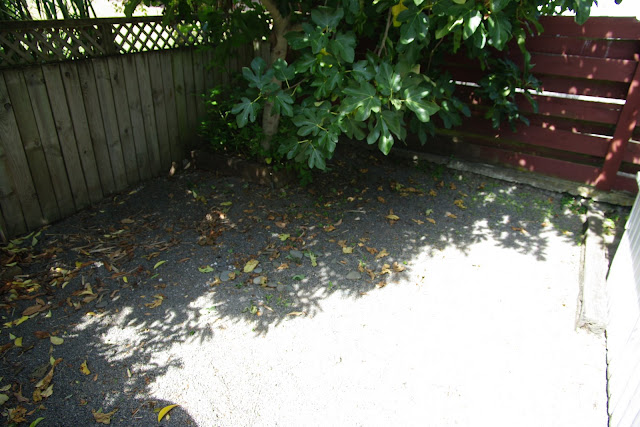 Alternative title #1: How I spent my Saturday

Alternative title #2: NZ truly is all fun and games 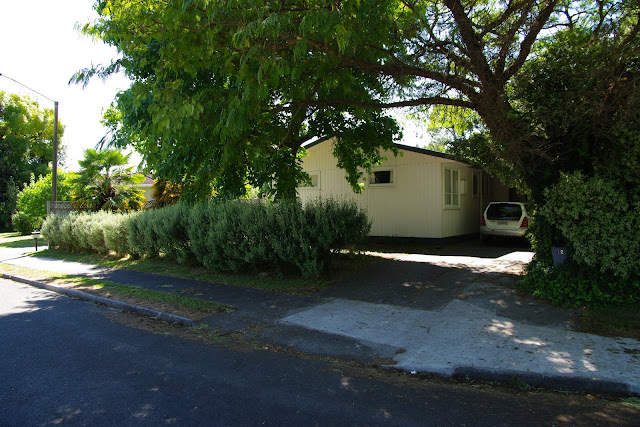 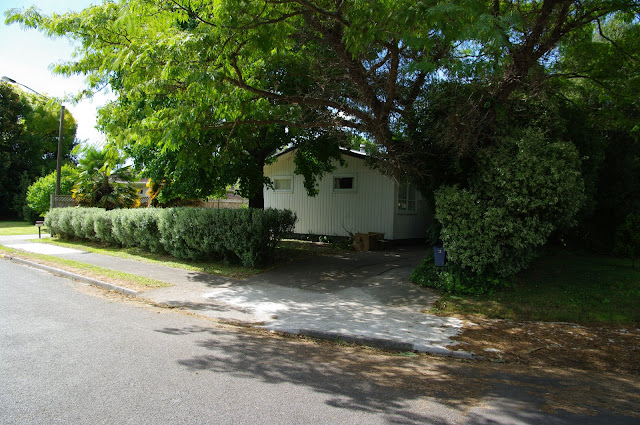 I know, not much of an improvement, but this was all I had to work with: 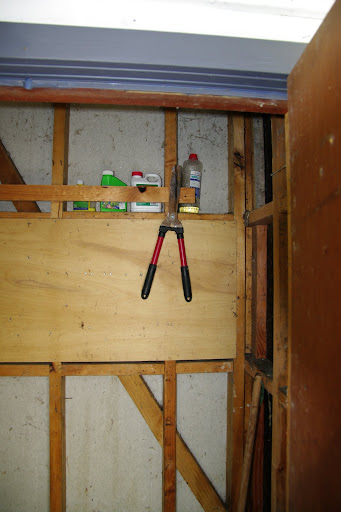 Three boxes of trash/clippings from the house we moved into 4 days ago. Attention landlord: if an unkempt house is returned to you when we move out, rest assured that it was in better shape than when we moved in. 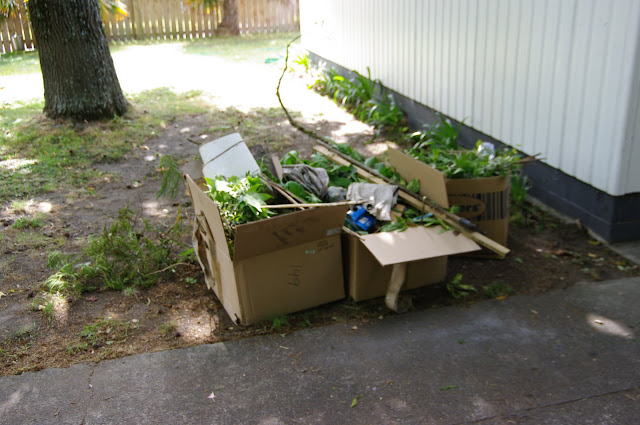 In other news: One of my coworkers was kind enough to give us us a little wood. We have two wood burning stoves, and really have no idea how we go about buying wood...or how much wood we should buy...or how much we should pay for it. Nicole says this will not last the winter, but hopefully it will tide us over until we figure out where to buy more from. Also, we were invited in for coffee and Tim Tams...which are probably the NZ equivalent of Oreos. 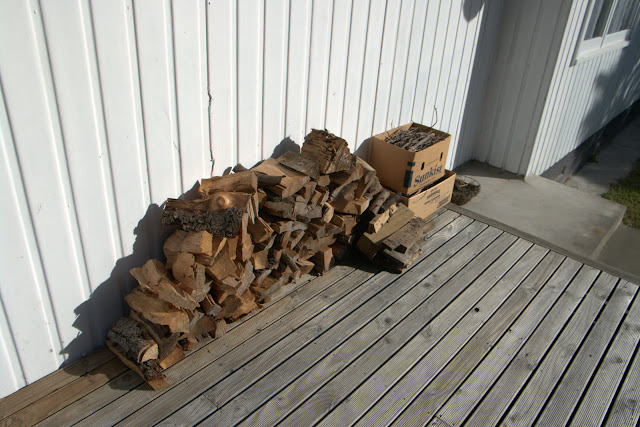 In still other news: Those of you who are longtime readers of this blog may know that I do not care for assembling barbecues. Each barbecue I have purchased (or been suckered into assembling for someone else) over the last 10 years has been more difficult than the last, and this one was not an exception. There are all kinds of Kiwi-isms in the instructions that I do not understand, like: "Lay on the flat". Anyway, the 15 minute job only took 3 hours. [I could now do another one in 15 minutes if I had an exact duplicate...] 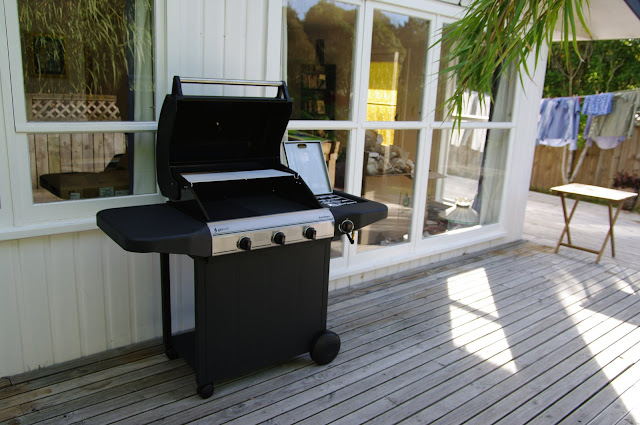 Wifi, gannets, and other stuff.

Apologies for my absence of posting. It is difficult to find a wifi connection in New Zealand...or at least in Hawke's Bay. Fortunately, (after many hours of struggle) I found our modem (and after many more hours of struggle), set up a wifi network in our house. I'll post more about the house later. It feels gigantic, and we have rooms that we don't know what we're going to do with (I tried really hard to not end that sentence with a preposition). It is heated by two wood burning stoves, for which we have no wood, so it was a little cold last night. And I must quickly learn to accept insects (and spiders) as cohabitants, as there does not appear to be such a thing as screens in New Zealand.

Thought I'd try to catch everyone up on what we've been doing the last few days (besides buying appliances).

Last Sunday, we took a drive toward Cape Kidnappers, home of the world's largest mainland gannet colony. For the less athletic, there are two tour companies that will 1) take you by tractor to within 1km of the gannets or 2) take you by bus to within a few feet of the gannets. But since we don't all have $80 to throw around, the gannets are also walkable. [Note to those from the USA: In New Zealand, when a government sign says: "Allow 5 hours for round trip", do not go thinking: "I'm in good shape, I'll finish in 4 hours." This is important to remember when visiting the gannets because your entire walk will be on a beach that is not there at high tide--you leave 3 hours after high tide, walk for 2 and a half hours, look at the gannets, then hurry back so that you will make it to your car 3 hours before high tide. Even then, you will find yourself walking in a foot of water at least once.]

[One more quick note. Beaches (below the high tide line) in New Zealand are considered streets, so a 4th option would be to drive. There were a few people doing this in SUVs of various sizes and conditions, and several people making the trip on ATVs and off road motorcycles.]

But I digress, the walk is absolutely stunning. 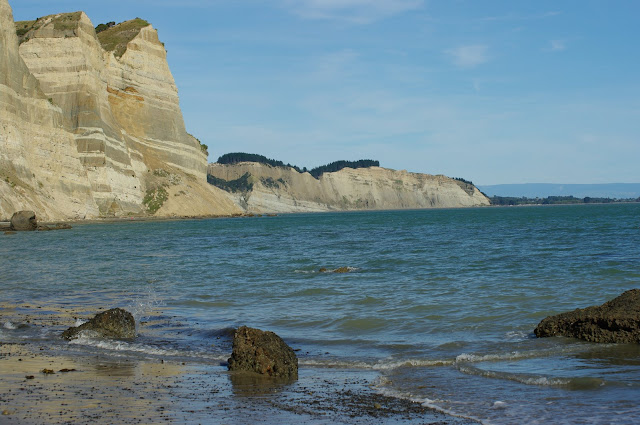 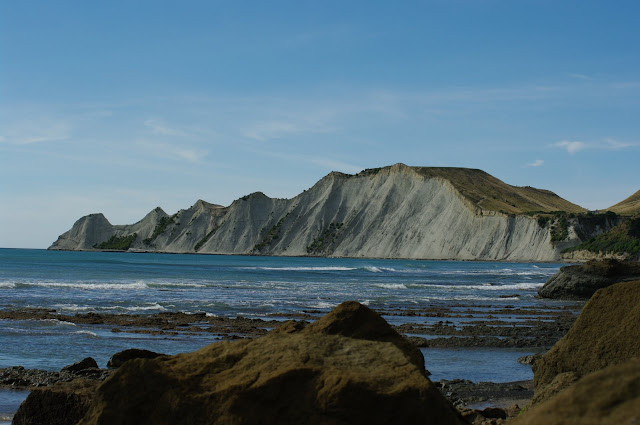 On the walk, you actually get to see 3 colonies of gannets. 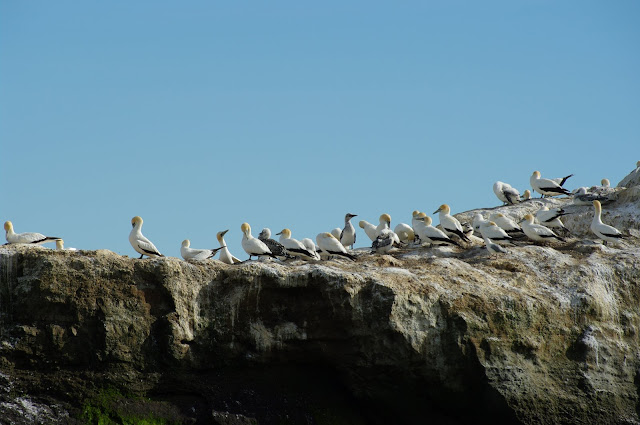 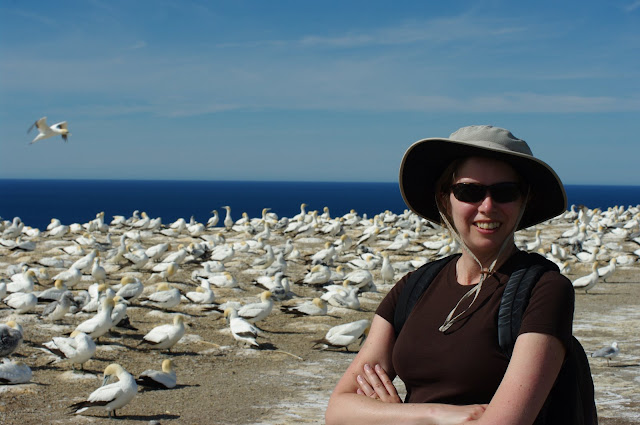 Looking back through my pictures, it looks like we were at Waipatiki Beach the day before. The beach is nothing special, though somewhat secluded. 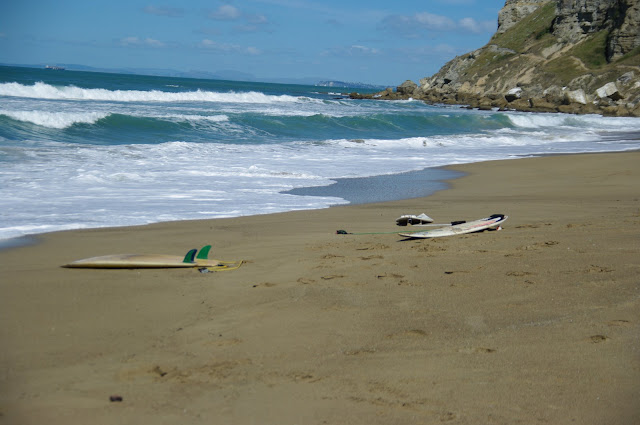 The small town around the beach is rather neat to take a stroll through; there is not much here, just some houses and a holiday park. 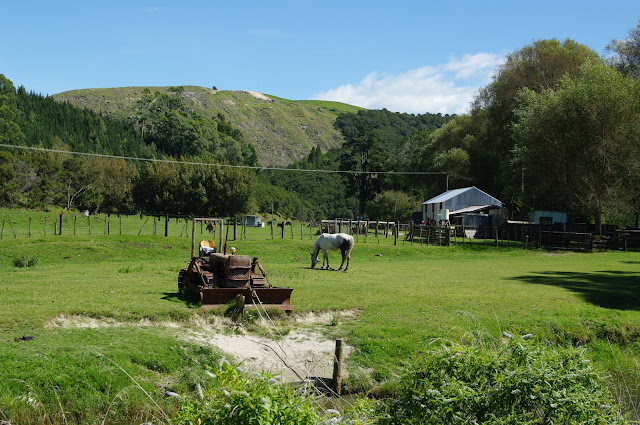 Like everywhere in New Zealand (including our backyard), there's a reserve nearby. I believe these are native plants. 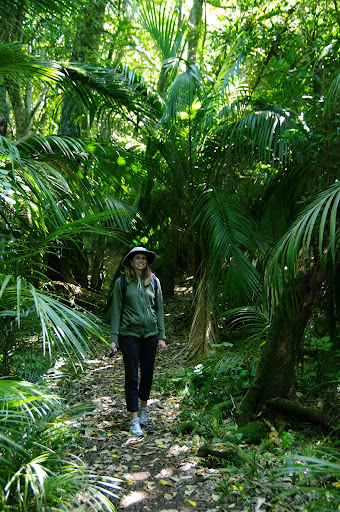 And like everything else in New Zealand, you usually have to work (climb) for the good views. 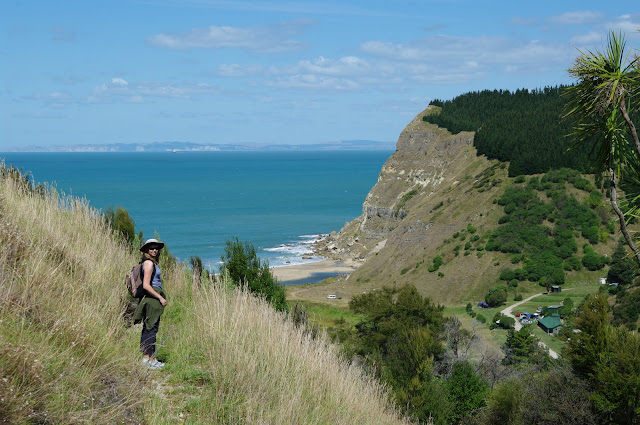 I had been averaging a flat white a day until I started work. As is customary in NZ, my employer supplies tea (and coffee)...the coffee appears to be of the instant variety, though some prepare it by running it through a french press, so it may well not be instant. At any rate, I had switched to tea, as that seemed like the proper thing to be drinking during tea time. I've been drinking a whole lot of tea. A cup before work (if I get there early enough), a cup at tea time, a cup at lunch, a cup at tea time #2., a cup with Nico after work if she's making it...

As those of you who know me are probably aware, I am a bit of a coffee connoisseur. And although I like drinking tea, I know very little about it. I assumed the tea provided at work was not of a particularly high quality; today my Irish colleague (who drinks more team than do I) remarked that the tea here is shit (or do the Irish say shite?). At some point in the future, I'll have to do a post on Kiwi obscenities (or lack thereof, as “shit” does not seem to be one). This started a discussion about Nico's obsession with purchasing an electric kettle...but I'll save that for another post, as well.

Enough digressions, I suppose. I started typing about coffee because I am now in a coffee pool. I have a standing order for a (discounted) flat white to be delivered every Friday morning. I made the mistake of ordering a large today which very likely had four shots of espresso in it. Hopefully this explains why today's entry has become so long and boring. I think I have also joined a weekly lottery pool, but I was in a caffeine daze, so I'm not really sure what I agreed to..

Sorry if my entries become a little less frequent for the next week. We've moved to temporary residence #2. I had called it a bach previously...it's more like a bed and breakfast (only without the breakfast)...just in a little neighborhood a short stroll from the Napier CBD. There are chickens just behind our bedroom. Very Kiwi.

Must end this post now. We've been invited to a barbecue. We're supposed to bring whatever we want to drink and something for the barbie. Nicole and I are in disagreement about what this means.
Posted by Michael Lasko at 3/05/2010 03:01:00 PM 1 comment:

Take hamburgers. Here, hamburguesas are really bad.
It's known that Americans like hamburgers, so again, we're idiots.
But they have no idea how delicious hamburgers can be.
It's this ideal burger of memory we crave...not the disgusting burgers you get abroad.

On the way home, I decided I am never going to be able to do a Kiwi accent; to tell you the truth, I can't even recognize one yet. I can however, do a reasonable Irish accent; throw in the red hair, and it might be believable.
Posted by Michael Lasko at 3/03/2010 09:29:00 PM 2 comments:

The beach closest the Napier CBD is thought to be one of the worst in New Zealand by the locals. And depending on what one is looking for in a beach, it quite possibly is. There is no sand, there is a sharp drop off once you put your feet in the water, and there are strong currents that suck entire families (of tourists) out to sea. There are probably sharks, also.

I actually have not verified anything except for the lack of sand. Instead, the beach is covered with black rocks that get progressively smaller the closer you get to the water. The lack of sand is sort of nice, in that these rocks do not stick to your feet. However, at least to my American feet (which are not used to going barefoot), it got a little painful playing frisbee with Nico after a few minutes.

A couple of pictures of the beach; I believe that's Cape Kidnappers off in the distance: 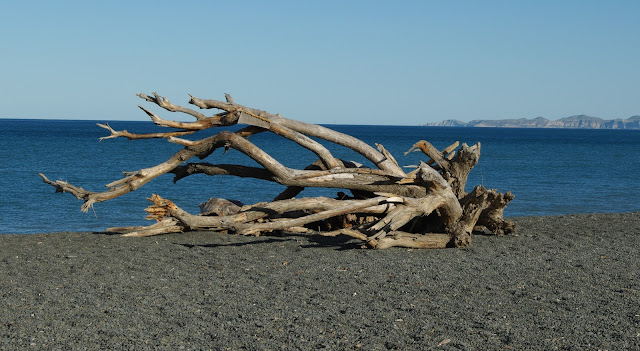 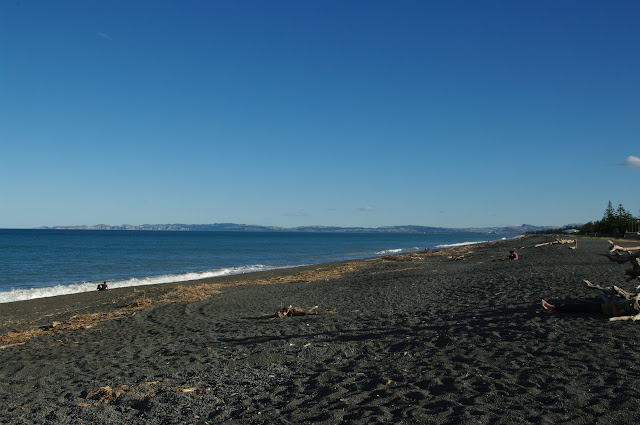 And a picture of Hastings Street (one of the main drags in Napier): 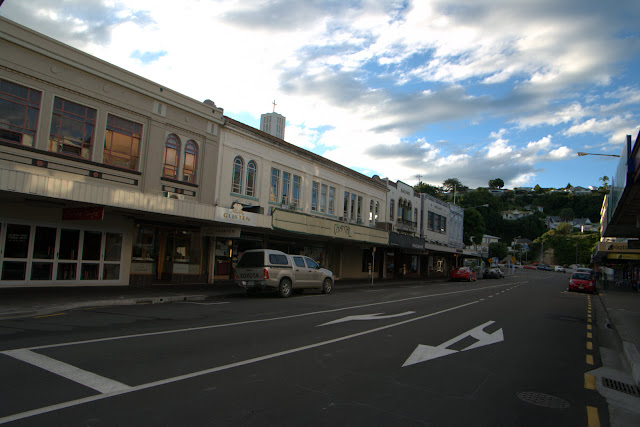 Looks like we're going to be homeless until March 15th.

We're getting kicked out of our hotel this Friday, so we'll be moving to a bach for 10 days.

After that, you are all welcome to come and visit.

1) If you want a ride to or from the airport: Fly into Napier. We are a 5 hour drive from Auckland; unless you're my mother, I am not driving 10 hours to pick you up.

3) Something about fresh fish and house guests; seriously, there's quite a bit to do in Hawke's Bay, but unless you're spending 3 or 4 weeks in New Zealand, you will probably not want to spend more than 3 days here.
Posted by Michael Lasko at 3/01/2010 06:51:00 PM No comments:
Newer Posts Older Posts Home
Subscribe to: Posts (Atom)