The view from here

January did not end at the end of January, leaving us with very little time to train for New Zealand. So we decided to cram all of our (pre-New Zealand) riding into one day on Saturday's Tour de Palm Springs.

After the first 12 miles (up hill and into the wind), I was getting pretty worried. Fortunately, as usual, I was able to find a tandem or two (and even a triplet) to draft behind. After the first rest stop, we met up with our Santana friends Mark and Maureen. Mark assured me that the next 50 miles would be down hill, and that the Tour de Palm Springs is the easiest century ever. You would not think it would be necessary to point out that Maureen told me last year they were going to ride one century a month for the entire year...but it is indeed necessary; there is no such thing as an easy century. As a matter of fact, this century was 102 miles long (my flight deck measured it at 104).

Things overheard during the tour (some may have been spoken by me):

"This stopped being fun at about mile 45."
"I've been surviving the last 10 miles on packets of mayonnaise." (I certainly did not say that one.)
"I like peanut M&M's."

Here's a couple of pictures Nico shot from the bike: Mark and Maureen, then a very flexy triplet...I did not really believe in frame flex until I rode behind them. Off in the distance of the triplet, you might be able to make out some windmills. The photo does not capture how fast they were all spinning. 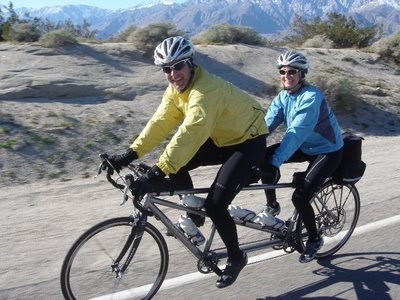 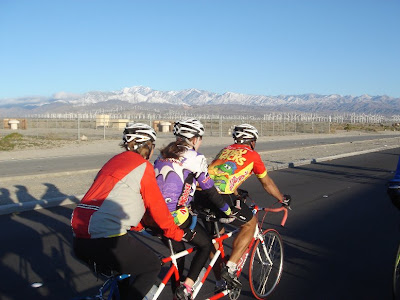 Our times were not impressive; somewhere around 8 hours total and 6 & 1/2 hours pedaling. But we finished, it didn't rain, and we can go to New Zealand next week knowing that we are in 100 mile shape.

In other news, the takealotofdrugs photo equipment has just been upgraded. You'll still probably see some pictures from the point and shoot Sony, as I'm afraid to let Nico take pictures with my new Pentax K20D from the bike. We have not yet decided if the new camera will be joining us on the bike (it weighs over 2 pounds, and would not take kindly to a fall).

I stepped outside this evening to test it out. People are always asking if we can see the ocean from our house. I usually respond: "From the street out in front." Here's a picture of said view, shot with a 50 mm lens (which I'm told is equal to a 75 mm lens on a film camera, which if my memory from high school photography class is correct is about equal to what you would see if you were standing on my street [and looking through a viewfinder without magnification]). 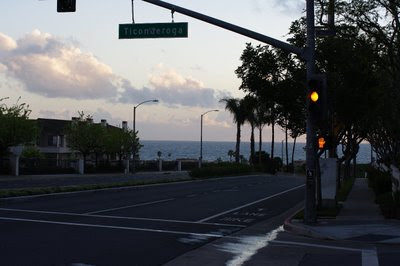 And here's a shot of the harbor from the park across the street. (The size of this picture is 33% of the original.) 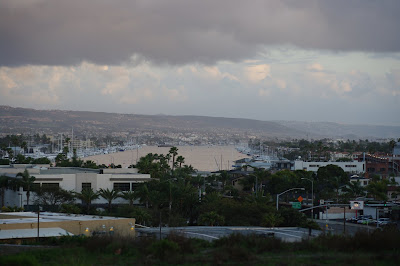 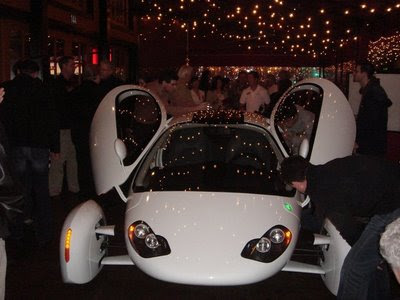 Well I didn't actually see it moving, so it remains possible that the people at Aptera have just built an impressive looking plastic shell so that I won't ask for my deposit back.

1) All dimensions are much smaller than I had been picturing.
2) Aptera does not have a Lexus sized budget for models. 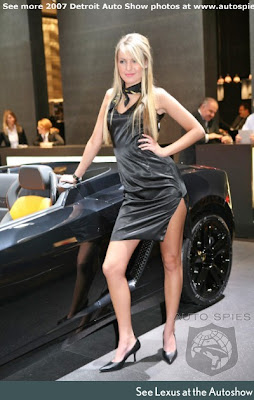 3) I had to bring my own model, but I could not convince her to take off the purple trench coat. 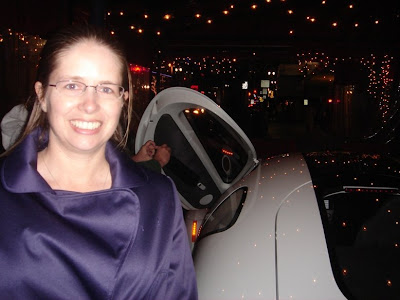 4) Too bad they are no longer making Prowlers. (In case you didn't notice, I'm making fun of the aforementioned purple trench coat.) 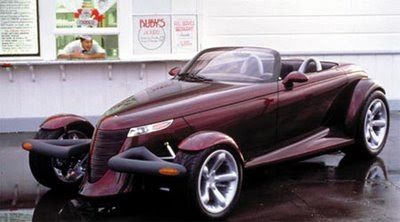 Alternative Title #3: Hey, My Friend Wants to Know Where the 12 Year Olds Hang Out
dubious integrity I may have associated with midweek over the last several years: Nicole has quit the Rainbow business. What's Rainbow, you ask? If I had to describe it in one word, I guess I'd say: "Service". If you gave me more than one word, I'd probably say something like this.

PS: Writing extra titles is fun. I had a few more, but they were even more likely to get me into trouble.
Posted by Michael Lasko at 2/05/2009 07:11:00 PM No comments:
Newer Posts Older Posts Home
Subscribe to: Posts (Atom)