I'm sure I visited synagogues in Israel with security, but there are military, police, and guards everywhere in the country, so I probably didn't notice anything at an individual building. In Europe, however, it was a very different story. In Florence, there were armed guards (both inside and outside the bars), lockers, and a metal detector. I can't remember if there were x-rays...probably they just made us put everything in a locker before entering. All of this on a Tuesday morning.


I had to steal this photo of the Great Synagogue of Sydney as we were there on a Friday night and I either didn't have bring a camera or I figured photographing an orthodox synagogue on a Friday night was bad form. Notice the bars. (Note that the much larger St. Mary's Cathedral on the other side of Hyde Park does not feel the need to erect a fence.) I remember seeing some flyers for a pro-Palestinian protest taped to lamp posts on the street in front. And I remember the security. There were two personnel; one was a twenty something girl...if either were armed, they were concealing. Still, this was the most difficult synagogue entry I've ever had to make...and we were travelling with a six month old Jancie. Here's an excerpt from someone else's visit to a synagogue in London, but the dialogue is pretty much the same.


“Where are you going?”
“To synagogue.”
“Where are you from?”
I paused, because I’m never really sure of that answer any more. “New York. I work for New York University, I’m visiting.”
“Where do you go to synagogue?”
Again, I faltered. There were too many answers to that question. “Well, I’m originally from Seattle and there I went to Shevet Achim.”
“Who is your rabbi?”
In Seattle? New York? “Well, it’s complicated, but Rabbi Yehuda Sarna.”
“Ok, and do you keep Shabbat?”
“Yes”
“Do you have ID?” Trick question.
“No, but I emailed my passport copy to the shul on Thursday.”
“OK, and is there anything in your pockets?”
Just my hands, I showed them. Convinced, they radioed inside and the doors opened.


Although it is by far the most recent foreign synagogue visit, my memory of the entrance is the least clear of these 3. It was Ireland, so there may have been some drinking either before or after. Unlike either Great Synagogue above, this one is somewhat hidden and in a residential area. I believe it is fenced, but this was open when we arrived for services. There may have been a member greeting people at the door. Unfortunately, we did not make it to a Belfast synagogue.

The last time I tried blogging from my phone, there was an official google app. It didn’t work very well, but at least it existed. No more. Prior to the existence of smart phones, I vaguely remember sending posts via email that then magically appeared on my blog. Since I don’t want to go back to those dark ages, I’m giving the desktop version a try on my phone. My phone is very small.

Back to business: Here’s a short 24 minute video of our drive to (and from) Hana, if you’re bored. As you can see, it rained. A lot. I always expect rain when going to Hana, but it was excessive this time. When we eventually arrived at Wai’anapanapa State Park, we were rewarded with some not raining time to set up the tent and this ocean view (from the tent). It’s just about the best $13 you can spend on Maui ($19 for you Mainlanders). 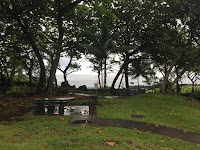 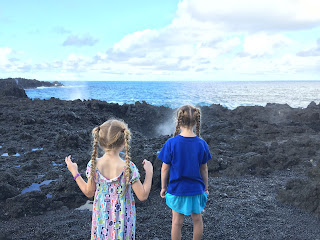 A brief stroll from our campsite brought us to this little blowhole. This is what the Lasko girls look like when they’re listening to me and not trying to get as close to the hole as possible without falling to a watery death. 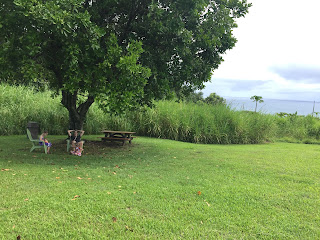 After a night of torrential rain, wel hiked a good half of the Pipiwai Trail; here’s  the family taking a Cheeto break.

I’m ending this post here. Using desktop blogger on an iPhone is exceptionally difficult. Apologies if the photo alignment is off.
Posted by Michael Lasko at 10/14/2018 10:38:00 AM No comments:
Newer Posts Older Posts Home
Subscribe to: Posts (Atom)