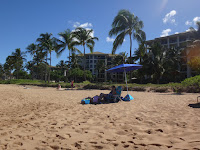 It's not particularly funny, but whenever I have to replace something I hadn't thought I would need to purchase a second time, I think of that second bottle of Tabasco. And after four-plus years on Maui, we had to move onto our second beach umbrella. If you spend any time on a Maui Beach, you'll notice a whole lot of Tommy Bahama umbrellas. That's because Costco sells them so cheaply that many tourists stop off to buy one after their flight and them on the beach at the end of their vacation. [Aside: I bought mine on Amazon during a rare Costco umbrella dry spell.] These Costco umbrellas are not very well made and it does not take a very strong wind to let you know it's time to leave the beach. So when the four-plus years of rinsing the pole in the ocean caused a horrible dangerous shattering of rusted aluminum, I was sort of happy to be able to upgrade. The new umbrella is bulky, heavy, and difficult to set up, but it's supposed to withstand 42 MPH winds. Review to follow. 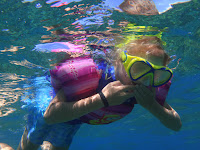 I've been trying to get Jancie snorkeling. She's fine with goggles. She's fine with fins. She's fine with the snorkel on land, but as soon as she gets in the water, there's some problem that begins with screaming and ends with her wanting to get out of the water. I lured her back in with the mask only after promising she could take some underwater photos. [Note: all under water photos taken by Jancie today are of her hands, so they will not be posted here.] 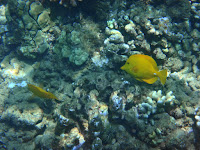 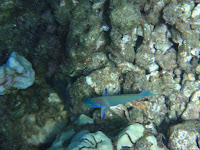 In case you hadn't noticed, I've quit Facebook. Or I guess I haven't actually quit, but I've dropped off for the present and near future. Sharon Kim, if you still read my blog, it was your hotel with a harp in the lobby. First I thought: I want to go to a hotel with a harp. Then I thought: why does Sharon get to go to a hotel with a harp? Then I thought: Everyone must be having similar reactions to every single one of my posts. I realize this blog might have the same effect, but I figure anyone bothering to make it to my page either came here on purpose, they wanted to know the caffeine content of a decaf nespresso pod, or perhaps they heard this is the place to find nude photos of Nico (apologies, if there ever were naked photos of Nico on this blog, they were hosted on imageshack; I didn't realize imageshack was still in business, but even during dot.com 1.0, they were not terribly reliable).

If you haven't seen enough fish yet, here's a short video with a special guest green sea turtle.