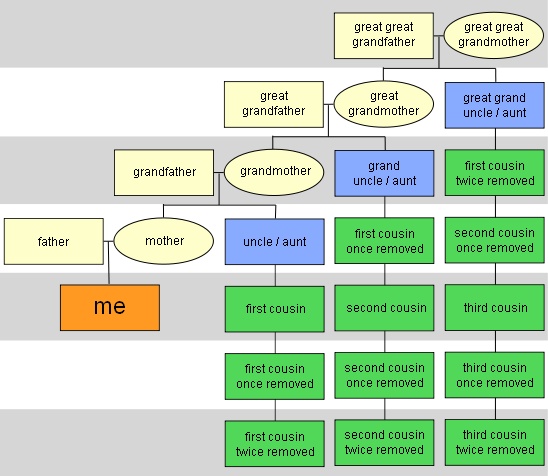 It is rare that anyone argues with me when I hand out pharmaceutical advice; I'm guessing this is because 1) Most people do not have any background knowledge of drugs and 2) If I don't know something, I'll look it up [Read: I am never rarely wrong]. But the one useful thing I learned while working on my first degree (in a genetics class) causes so much discussion (often heated), that I have been wondering if I should just keep it to myself. [Actually, I learned two useful things during undergrad, but the other one rarely comes up in conversation since I'm no longer in college.]
Everybody has an opinion about the definition of a second cousin. I suppose the area is a little gray because the term "cousin" is used so loosely (especially in New Zealand, where everyone is a "cous"). And I also suppose this shouldn't really bother me...but I like I said: 4 years of college, and this was the only useful thing I learned. So anyway, here's a cousin chart I found on the web. Genealogy.com has some relatively easy to follow info if you would like to do a little more reading. 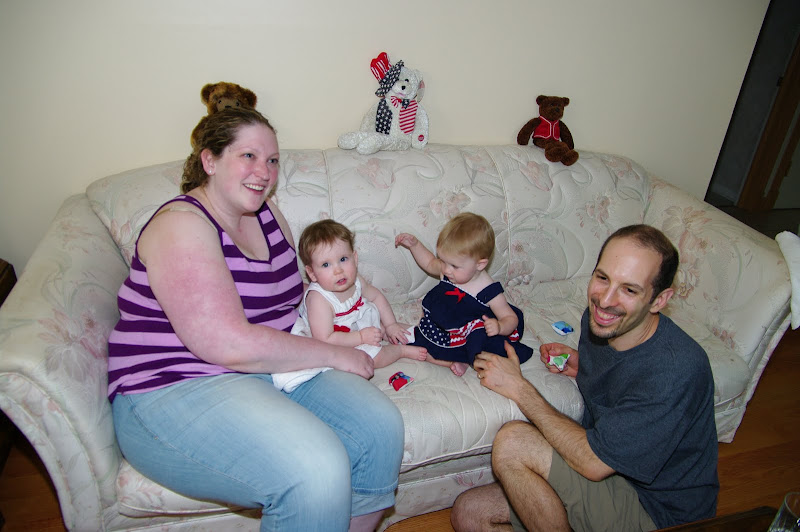 On that subject, we ran into a whole bunch of long lost cousins while in the United States. [If anyone wants his/her likeness removed, you should of thought of that before looking at the camera*]. For the first time ever on takealotofdrugs.com: Jancie's second cousin!!! Born 2 weeks ahead of Jancie and 8200 miles away (as the crow flies). Also pictured: My first cousins (or my first cousin and his wife, in case anyone is pickier about this cousin thing than me). 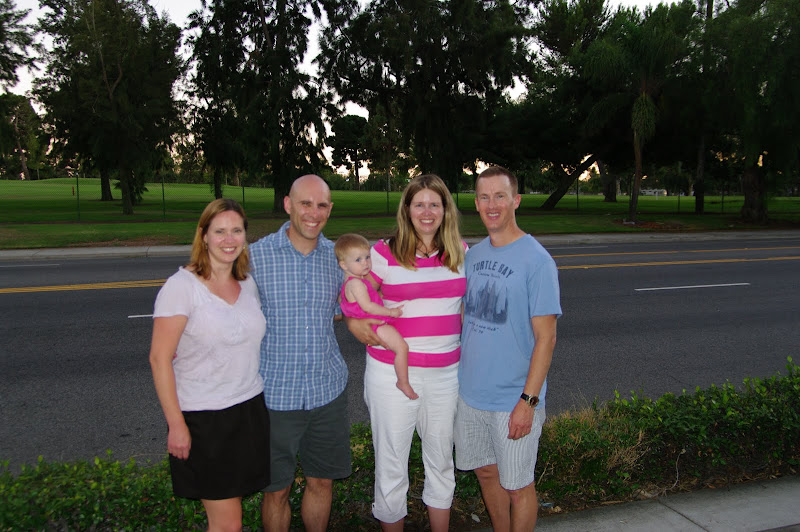 Browsing through my photos, I have very few pictures of all of Jancie's other cousins (first, first once removed, second, second once removed...that might be it). Maybe Nico would like to add on some pictures of the non-Lasko side. If only she knew how to upload pictures to a blog...Here's one more of Jancie's first cousin once removed, and a rare sighting of his girlfriend. Sorry the picture is blurry, Steven. Come on out to NZ and we can do better. *That was a joke. Just shoot me a note if there are any objections. PS: Nobody reads my blog.
Posted by Michael Lasko at 9/28/2012 02:10:00 PM No comments: 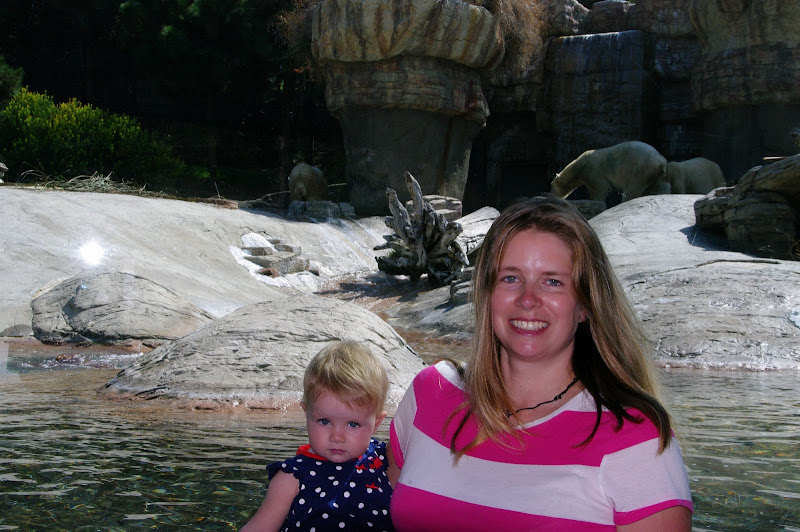 So it's still raining. Which means instead of gardening, I have time for another entry. I thought I would post something about "Places we have not been before". I suppose "we" should mean Nico and I...if we include Jancie, then that's just about everywhere. Anyway, here we are in Alaska. Okay, I lied...that's the San Diego Zoo.


We only made it as far north as Victoria. (I had been to Victoria as a teenager, but remarkably Nicole had not.) Here is a picture from the Butchart Gardens. It defies all earthly descriptions...and I think I should be trying for something like this in our backyard.

If I am not mistaken, Canada is the fifth country where I have run into Captain Cook. Unfortunately, my Captain Cook photos did not come out very well. Instead, here are Nicole and Jancie standing next to the statue, but the picture is of the Government House. 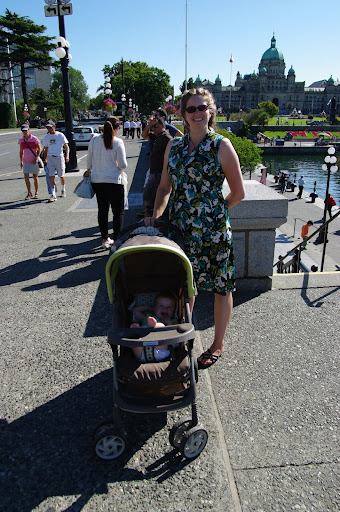 My mother's favourite thing to do on any vacation was to have afternoon tea at an expensive hotel. I'm actually not sure if the expensive hotel part was a requirement, but when you're in Victoria, the place to go is the Empress. 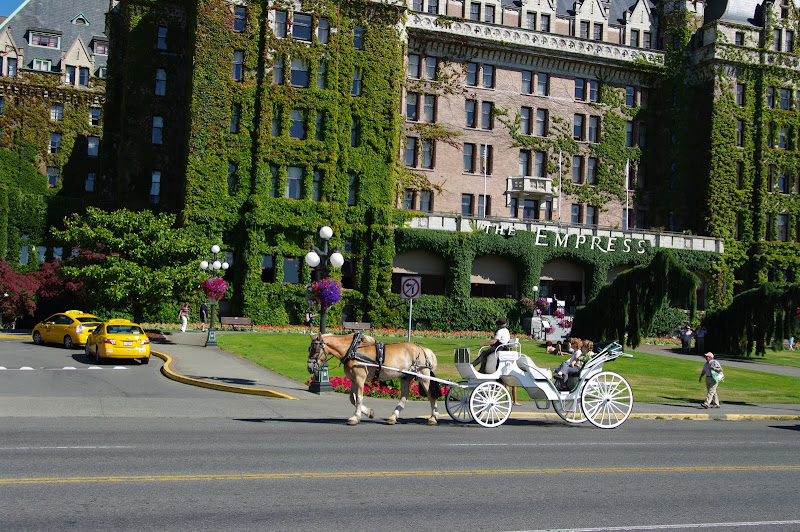 And I'm pretty sure it was less expensive 25 years ago than it is now, or I have no doubt that my parents would not have taken the kids. Speaking of which, I would not recommend attempting tea at the Empress with an eight month old. 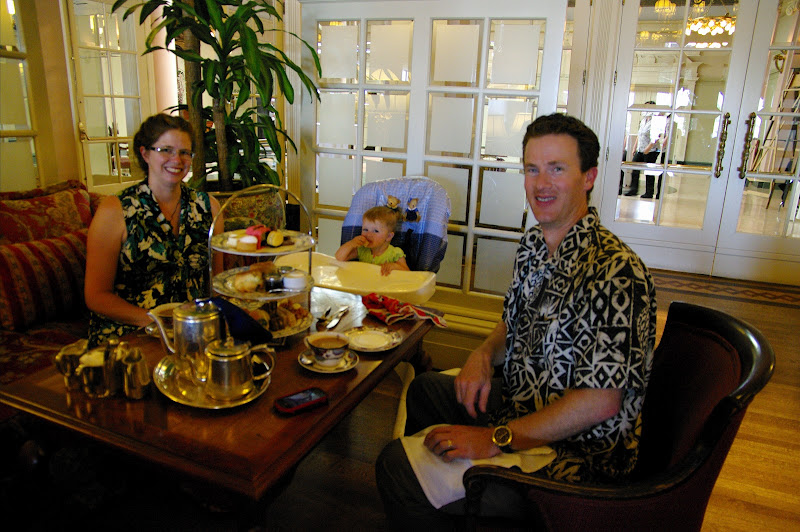 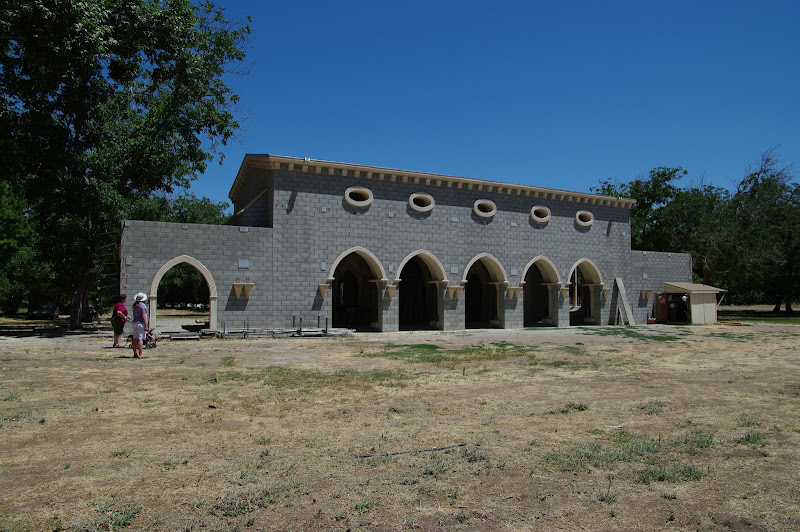 No posts since July; and even then I had not yet finished writing up our (then recent) trip to Sydney. It's raining today, and I don't start work for another month...so maybe I will be able to catch up. Biggest problem: Where does one start when trying to condense a three month holiday (and 800 pictures) into a few paragraphs? How about: Things to do in Red Bluff? If you had bothered to click that link, you would see that Red Bluff's motto is "A Great Place to Live". Having never lived there, I shall refrain from commenting...but if you are just visiting, there is not a whole lot to do. And it's really, really hot all the time. [Note, anything within an hour drive of Red Bluff will be considered as a thing to do in Red Bluff for the purposes of this post.]

1) Abbey of New Clairvaux--So there are these monks...and they make wine. It's not great wine, but it's wine, and it's not expensive. In addition to making wine, they are also (re)building an 800 year old monastery from stones that William Randolph Hearst brought to California from Spain.

2) Sierra Nevada Brewery--A fantastic tour; it's free, and they let you stick your hands in the hops. Warning: Most Sierra Nevada beers are very high in alcohol, and they make you taste like 10 of them...and they pour each one in a different glass so they can pour them really quickly to make room for the next tour.


3) Try to take a portrait of Jancie. Jancie does not like cameras...and I am not a very good photographer. Here is my best effort. 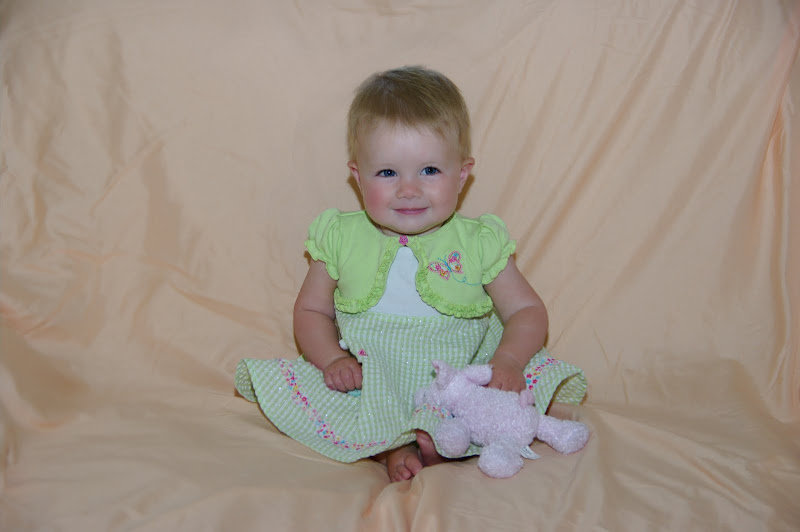 Note: I have since decided that my favourite Jancie photo was taken outside the Bahai'i Temple (which is nowhere near Red Bluff). 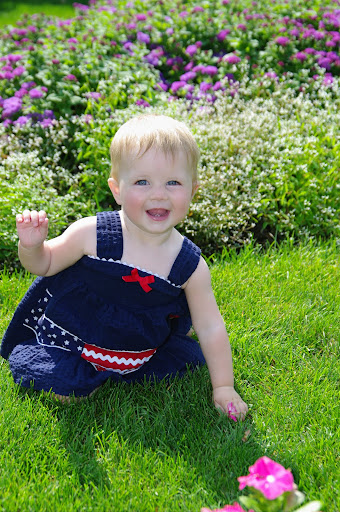