I suppose if I had seen the classic Kiwi Movie "Once Were Warriors" (or read the book), I would recognize Roosters as a classic Kiwi bar. But I haven't, so I'll just call it the most townie of all townie bars I've ever been in. We've been trying to stop by once a week, to get a feel for the real New Zealand, and are hopefully not gentrifying the place too much. 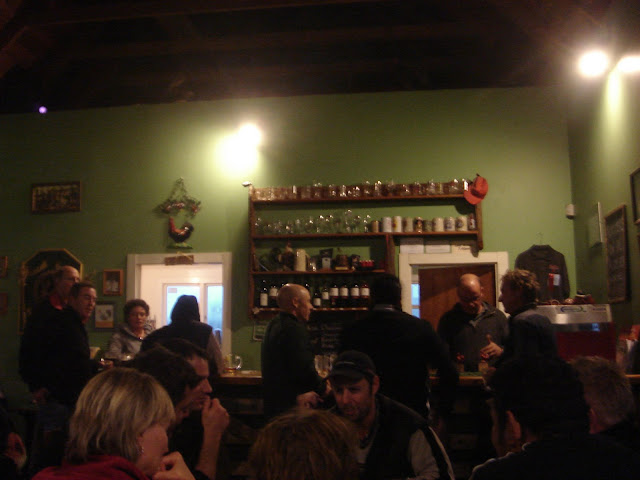 Nico and I are a bit of an oddity in New Zealand, in that we've moved here with the intent to stay forever. Such is not the case with out friends Aoife and Conor, who are just about to return to Ireland. Farewell pints last night at Roosters; goodbye Conor and Aoife, it was nice to have met you. 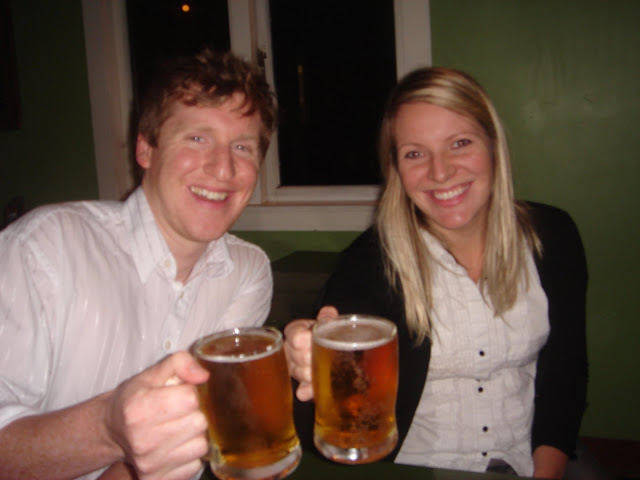 And an early morning wakeup to catch the bus that my coworker Sarah had chartered. Nothing better to do in the rain than ride around in a bus and taste wine. 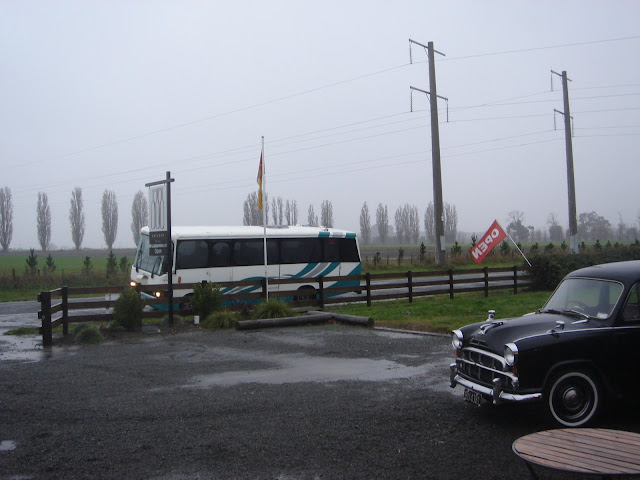 Here's our very large party at Triangle Red. Either I was starving, or they make the best pizza in Hawke's Bay. 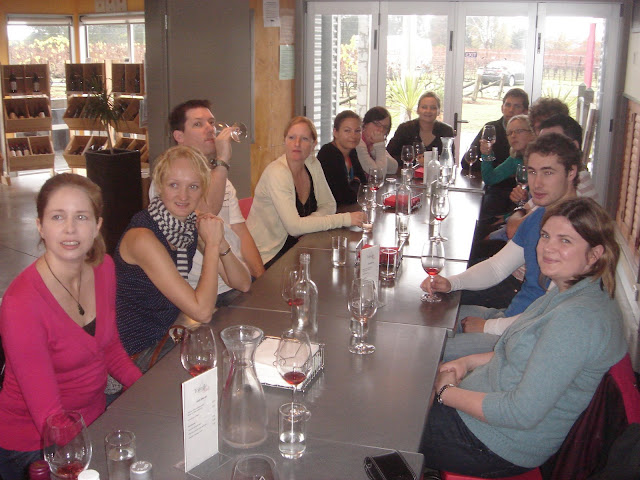 Nico and I took the bus to Auckland last Saturday with the hopes of picking up my PT Cruiser and driving it back home; flying would have been preferable, but on the short notice given to us, the bus was far, far more affordable. Also, we got to see all kinds of interesting things during the 8 hour bus ride. 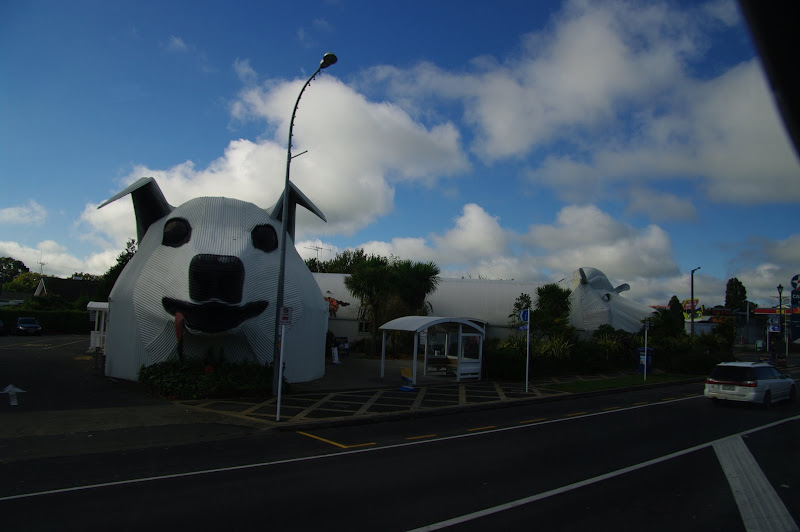 Arriving in Auckland, we were treated to several hours of stunning weather on Saturday afternoon/evening. [Moored boats in Okahu Bay, if you're interested.] 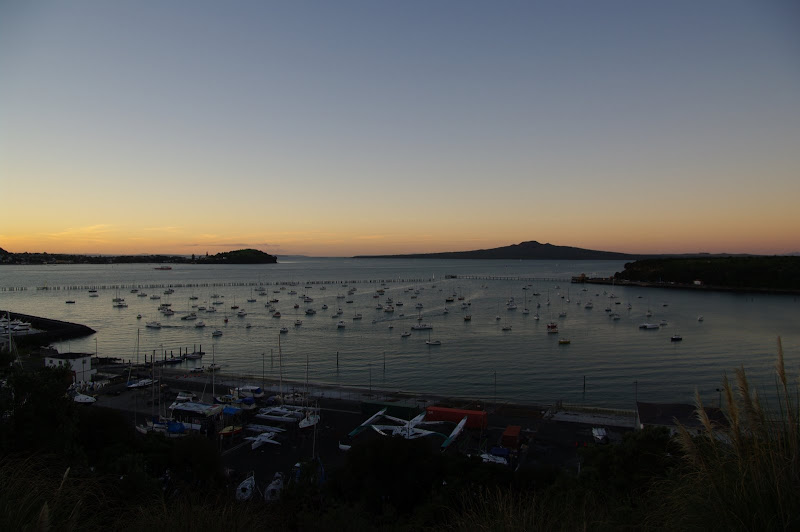 Unfortunately, Sunday was more of what I'd expect from Auckland (which claims to get more rain annually than Seattle). 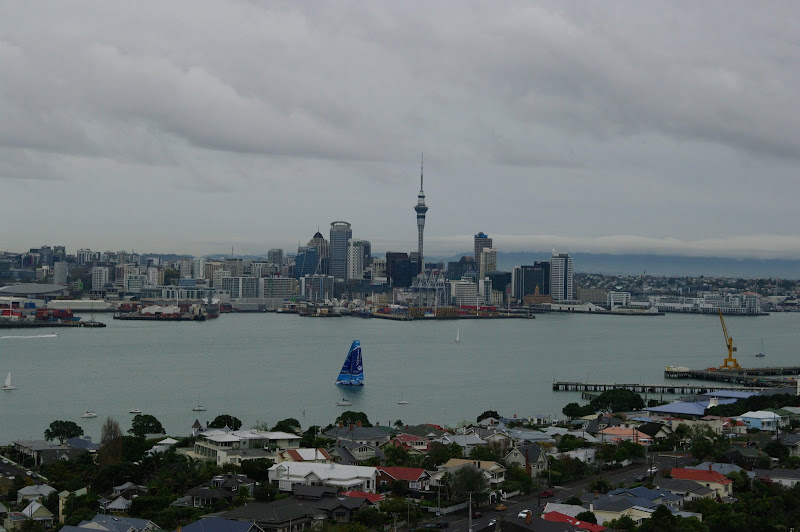 The blue sails belong to either NZ40 or NZ41...hard to tell which from the top of Mt. Victoria. [That's Nico manning the largest gun in NZ--fired only once because it shattered windows miles away.] 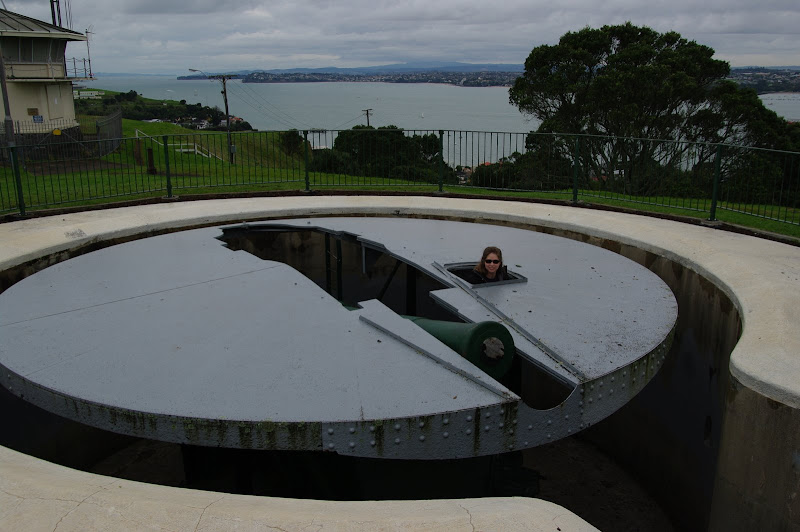 Our travels then brought us as far as Orewa Beach, which like many places on the north end of the North Island, reminds me of Hawaii. 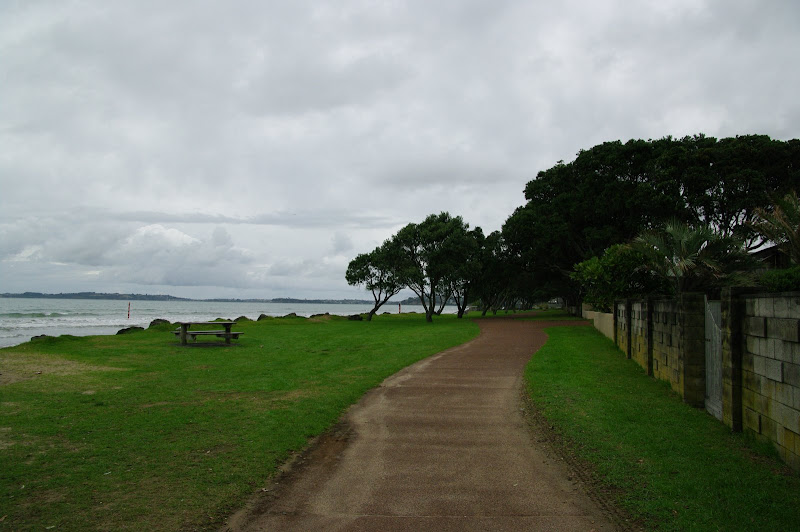 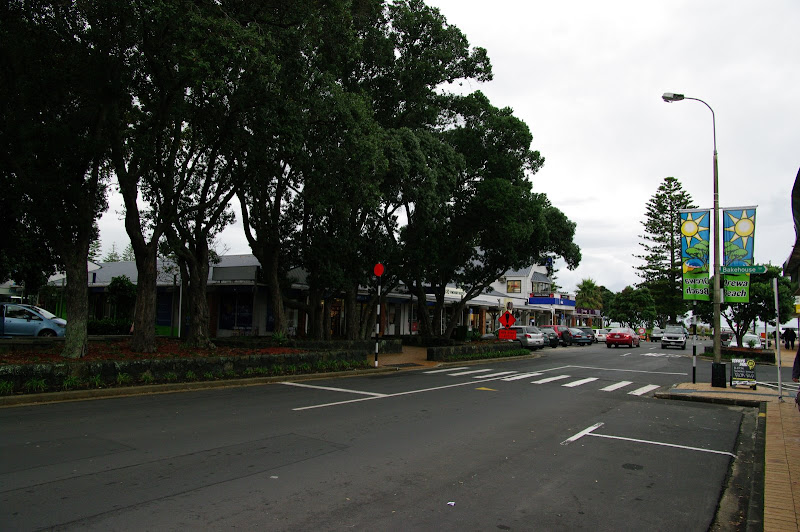 Monday morning was car pickup day. It was supposed to be ready at 7:00 AM, and finally appeared at 10:15 AM...out of gas and with a dead battery. Sometime around 2:00 PM, AA installed a battery that almost fit, and we were off to the North Shore Compliance Centre. [In case I've neglected to mention it here, my car took so long to get here that they changed the law, and a left hand drive car can no longer be registered; the place in North Shore had agreed to certify my car under the old rules.] Sadly, they were about to close, and said it would take them a couple of days to complete the process.

Since I had to be at work the next day, we decided to drive to another compliance centre (in Napier). None of the many cops we passed during the 5 hour trip seemed bothered by our California plates. And in two weeks, the compliance centre in Napier says they'll have time to look at my car...

PS: If anyone's curious, driving an American car on the left side of the road is no big deal. In fact, if you're used to the steering wheel on the left, it will probably be easier for you...with two exceptions: 1) if you have to yield to car coming from the right (as at a roundabout), it's a little hard to see (you're passenger and the front pillar are in the way) and 2) if you're trying to pass someone on a two lane road, it's impossible to see around them from the left side of the car.
Posted by Michael Lasko at 5/28/2010 11:24:00 AM No comments:

Does this make me a Kiwi? 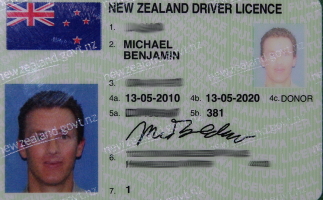 Alternative Title: A sausage sizzle is exactly what you think it is

After a 2 month + hiatus (while I nursed a variety of injuries), I began running again this morning. I only made it about 4k, but I made several discoveries during the run.

1) A beach house we looked at last month that we thought was way, way out of our price range is actually almost affordable. 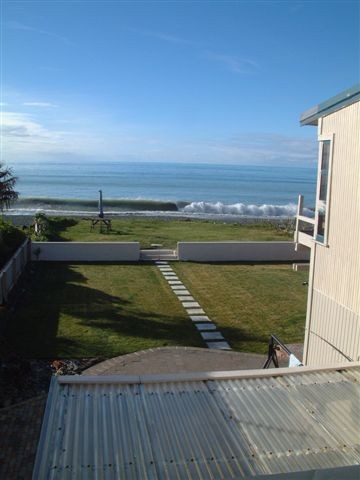 2) There's an old cemetery a block from our (current) house. 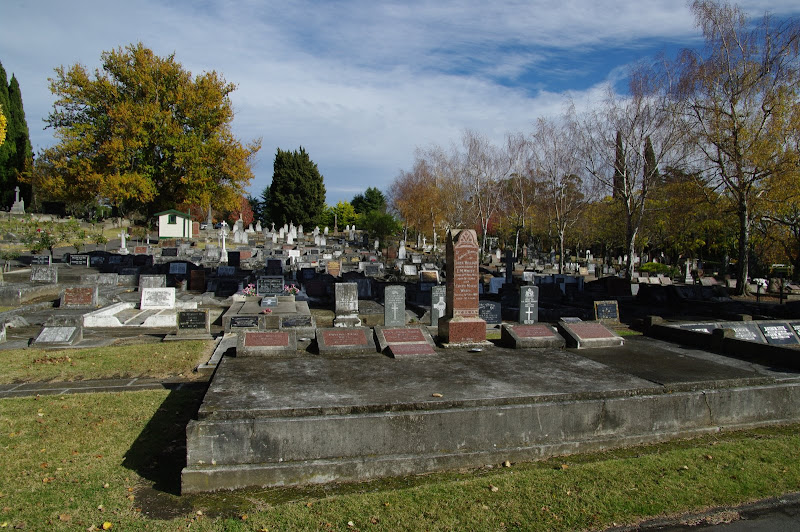 3) It is most certainly autumn. (There's a path hidden under all the leaves.) 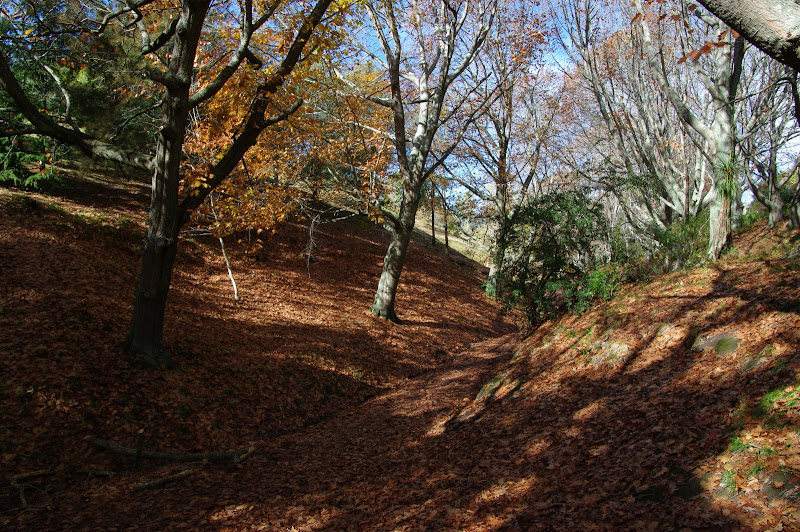 4) That train sounding whistle I kept hearing every other Sunday was in fact, a train. 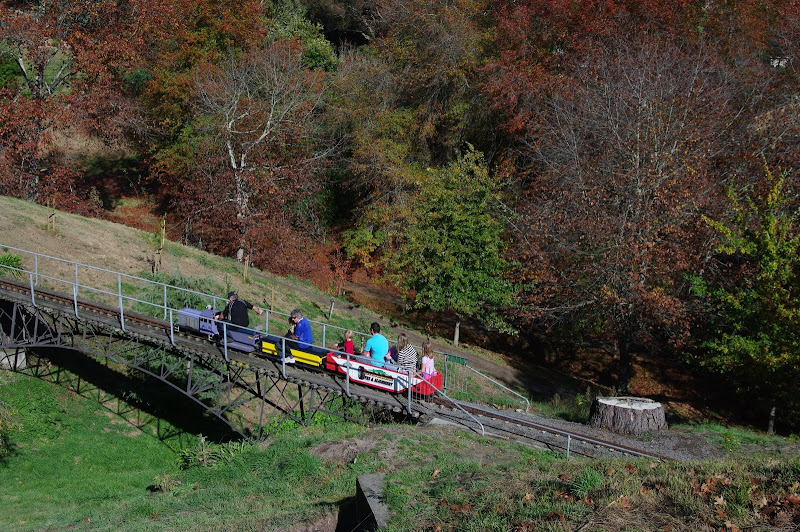 5) The Lions Club showed up for train day with the most extravagant sausage sizzle I have yet seen. 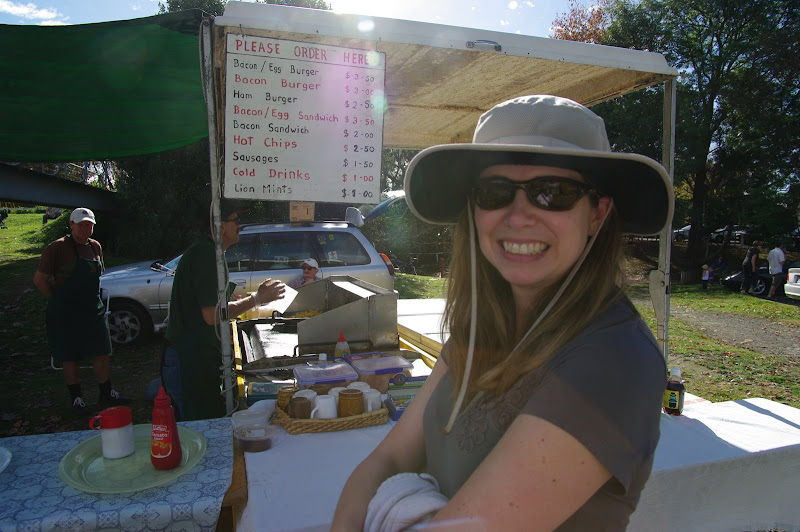 The grass is not so green

My sincerest apologies for my complete and utter lack of posting. I am quite busy completing my registration as a pharmacist [I have a law and ethics interview in 3 weeks that I feel somewhat obligated to pass]; I also have gotten hooked on staring at our wood burning stove for hours on end.

Last weekend, we began house hunting, and found our dream home. Sadly, it is a bit out of our price range...even sadder, it's only around $400k (US). It has a mostly separate guest unit (with it's own entrance, bathroom and kitchenette). If you would like a luxurious place to stay while you visit us, please consider purchasing a Lasko NZ Time Share. No contribution is too small or too large.

A short aside on looking for a house in New Zealand: Unlike the US, there are no buyers agents. The seller has a real estate agent (unless selling the house him/herself); while the agent may appear to be your best friend, he/she has a fiduciary duty to the seller to get as much money out of you as possible. It is very common for the listing to not include a price--homes are often sold by auction, or even worse: "tender", which is like a silent auction where you don't know the starting bid. The seller is not obligated to accept your offer, but you are obligated to buy if your offer is accepted. Open homes are popular, but they typically last only 30 minutes. An agent may show all of his/her current listings in a single afternoon (one after another). NZ real estate agents seem to be unfamiliar with staging; showing a freezing cold home is not unusual. Moldy shower curtains are also not out of the norm. PS: Proper Kiwi etiquette requires pointing out all the things wrong with the house (to the agent) as you walk through it. (IE: "There's mold on that shower curtain" or "Every window in this house leaks"). If you don't do this kind of thing, the agent will wonder why you're not buying it.

Back to something slightly more interesting (at least to Nico): Otatara Pa 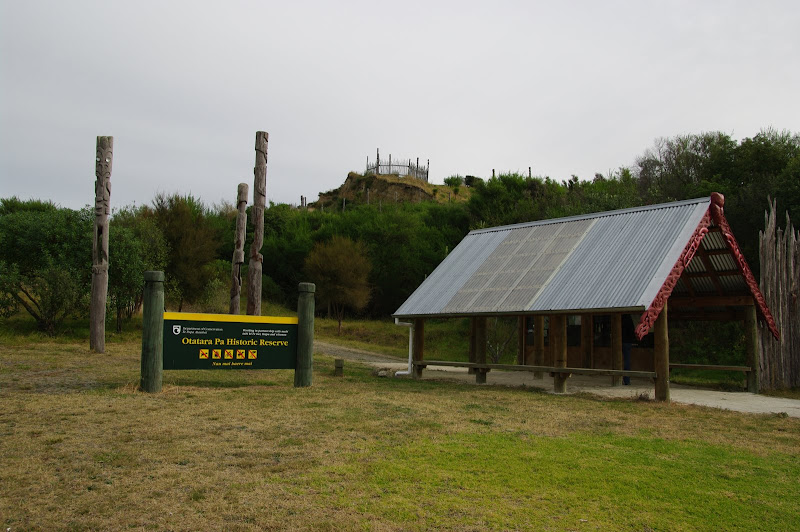 There are heaps of sheeps walking around Otatara Pa. 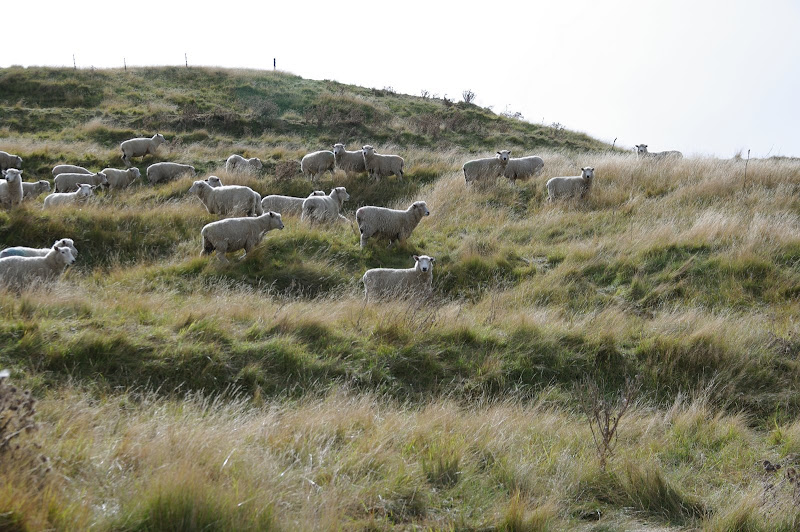 You may have noticed that these pictures are far less green than others I have posted (particularly if you look back to one of our 2009 trips). It takes quite a bit of rain to keep the hills green, and we are in the driest part of New Zealand. (Though as I type this post, it is raining a wee bit.) 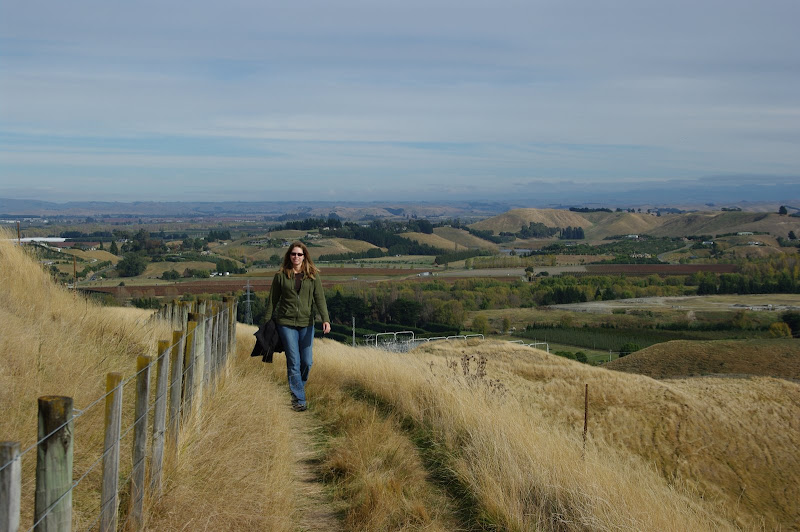 And for those of you who have been following my beloved automobile's journey on facebook, it is supposed to arrive in Auckland tomorrow. We're planning for a weekend in the big city to pick it up.
Posted by Michael Lasko at 5/11/2010 06:34:00 PM 2 comments:
Newer Posts Older Posts Home
Subscribe to: Posts (Atom)