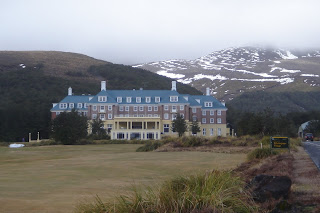 In a country with few impressive buildings (at least from a Eurocentric perspective), Chateau Tongariro was an unexpected surprise. I am pretty sure we could not have afforded to stay there, but I felt obligated to snap a photo on the way up the mountain. (Apologies: all photos in this post were taken with the Sony, so they might not be up to usual quality standards.)

As I write this entry, I am trying to remember the last time I saw snow; and a quick search reminds me of one of the reasons I bother keeping this blog. Although I grew up within a reasonably short drive of ski resorts, I only remember one or two family trips to the snow. Both of my parents came from very cold climates, and I am guessing that neither felt the need to drive an hour to see winter. I probably never learned to ski as a child because it was so expensive, and I probably never learned to ski as an adult because the Kaiser I worked at was the regional rehab center for Northern California. Every winter it would fill up with 25 year old men with broken necks.

But after a day (make that one hour) in Whakapapa, I am thinking I might take up the sport. Compared to all the other ways to get injured in New Zealand, skiing does not seem that dangerous anymore.

Jancie had a great time until her hands and feet got cold. Note to Nico: Cover your daughter's ankles! I never think to take pictures of her during a temper tantrum. I might want those some day.