Nobody Walks in LA

Three years ago, it seemed kind of silly to get into a car and drive for a half hour (or longer) to go on a walk. [Note for those you do not speak Kiwi: A "walk" is what you would probably call a "hike"; except if it lasts longer than a day, then Kiwis call it a "tramp".] But since we're Kiwis now, we drive all over the country just to go walking; also, Jancie's favourite spot is getting a little boring. 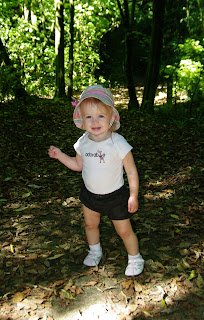 And so we set off for the White Pine Bush Scenic Reserve, once again with Jason and family...and some friends of Jason and family. Asks friend of Jason: "Did you do much walking in the States?" I wasn't sure how to answer that question. Nico and I walked quite a bit: to dinner, around Chicago (or anywhere we were visiting, for that matter). Does city walking count? How long of a conversation do I want to have about walking while walking? So I told him I was from Los Angeles, then sort of described the scene from LA Story where Steve Martin gets in his car and drives next door to Marilu Henner's house. Anyway, I did not take many pictures on the walk, because Jancie would not get in her little piggyback carrier thing and insisted on walking most of the way (1.6 km). Here is a photo I have titled: "Jancie in the Forest".

In other news, Nico, Jancie, and I competed in our very first tandem race. Nico and I have been in plenty of organized tandem rides...and some of them have gotten a little competitive. But we were unprepared for an actual race. Some of the faster teams brought track wheels (with discs) for the time trial stages. We brought Jancie in a trailer. We were over an hour behind the winners in one of the road stages. We sat out the "Two across" stage which teamed up the fastest and slowest teams (and so on) because there was an odd number of bicycles. Here's some footage of the leaders.