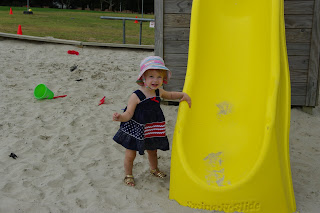 Some of you may remember that Nico and I used to take these really expensive tandem bicycle tours. Sadly, since moving to New Zealand, airfare (let alone the tours) are well beyond what we can afford. Fortunately, the tour organisers seemed to know we are broke, and have been bringing the tour to us every two years. 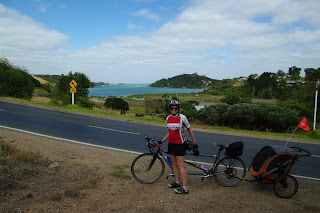 One would think I would have a lot of fantastic pictures of biking around Rotorua, the Coromandel, and Waiheke Island...but most of the photos I took were of Jancie, who spent the week finally deciding that walking is the best way to get around.

Although Nico and I were never superb cyclists, we tend to have a definite age advantage over the average tandem rider (or at least the average tandem rider on a Santana vacation), but pulling Jancie around has more than negated our age advantage. We were not quite the slowest bike going uphill; but we were definitely at the back of the pack on the flats and downhills. 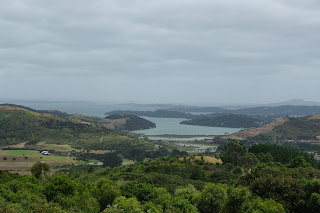 FYI: All the pictures in this post were taken on Waiheke Island, which is about a 40 minute ferry ride from Auckland. The Santana Tour does not include Waiheke, and we had been meaning to tandem it for at least three years. The island is far more populated than I would have guessed and a bit hilly, but still pretty tandem friendly. The main attraction has to be the 18 wineries (more if you count those without tasting rooms, though there are also some pretty nice looking beaches scattered about. Anyway, our 3 year NZ anniversary just passed. I am happy that we are still able to find new places to visit.
Posted by Michael Lasko at 3/06/2013 08:26:00 PM