Napier is a lovely seaside town, but the beaches are not the world's greatest. Forgive me if I wrote a post just like this one a few years ago. Last week, we went to Waipatiki, which is about 30 km north of us. In my opinion, Waipatiki is Hawke's Bay's most scenic beach. 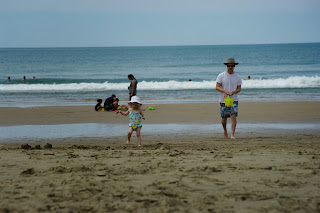 I did bring my surfboard to Ocean Beach. It was my first attempt at surfing in New Zealand; I won't bother to point out how long I've been in New Zealand, but let's just say I was not as sharp as I remember. I think I stood up for a total of 6 exhilarating seconds, hence there are no known pictures of me surfing at Ocean Beach.

If Ocean Beach does not feel like it is too far to drive to the beach (which it kind of does to me, in that we are on an island, and all), a further 10 km and we're at Waimarama. I had been dreaming of surfing for the last couple of days, and for some reason Nicole, Jancie, and Zooey were agreeable to yet another beach trip. Waimarama looks to me like what I think an East Coast (of the US) beach would look like if I had ever been to one. It looks extra crowded in all the photos I took because 1) it is crowded by New Zealand standards (the temperature hit 30 degrees Celsius in Napier today) and 2) there is so little sand above the high tide line that everybody is crammed together. Let's start with a photo of Zooey doing what she does best. And follow with a couple of pictures of Jancie; notice the beach full of sand, and Jancie wants to play with the boulders. 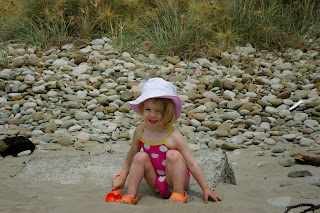 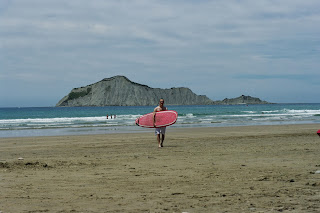 Waimarama did have the advantage (today, at least) of having a slow rolling swell, which allowed me to re-learn to surf. Sorry, there are no action shots; I am a surfing champion, and you will have to take my word for it. Here is a photo of me doing my best to look like I am on vacation.  Is anyone still wondering why I moved to New Zealand?