Everywhere I looked there was something to remind me of her. 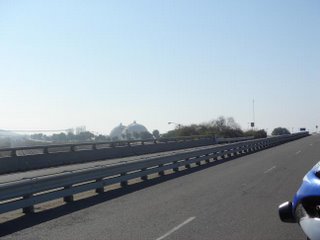 And with these two theories in mind, we rode the tandem down to San Diego for the weekend.

Being the social people that we are, we invited a couple of single bikes along for the trip. Here is Ben (on an early 1980s Schwinn) managing to stay ahead of Jessica, just before the hill at Torrey Pines. 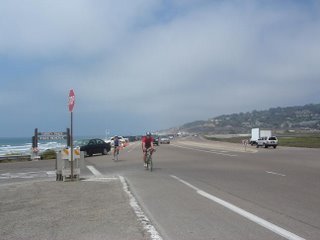 What would a trip to San Diego be without a visit to the zoo? It was 100 degrees at the zoo. Most of the animals seemed to like the heat.

Here is a council of three wizened giraffes: 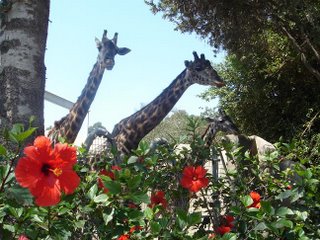 I usually tell Nico to look less goofy prior to having her picture taken. I must have forgotten this time. 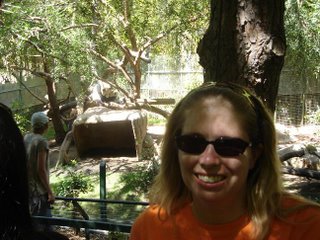 Hanah (who drove with the SAG vehicle) and her sister. 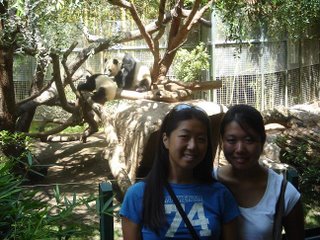 And finally, Snake Woman was worried about the caption that would accompany this photo. Hey Snake Woman, if you don't want to be called Snake Woman, stop posing with snakes. I was going to go with "Don't do it Big, Giant, Albino Python...don't eat the apple"...but then I thought, let's open it up to the board. Click the "Comments" link and post your caption suggestions for this picture...prize for the winner to be determined. 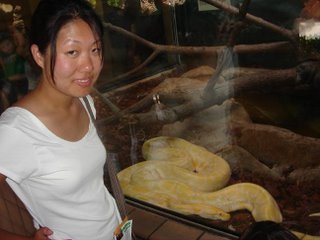 Nico and I were all alone for the ride back, with Ben and Jessica choosing to return in the SAG vehicle. There was a good 10-12 MPH headwind for the final 70 miles, making the ride home considerably worse than the ride there...probably the most difficult bike ride I have ever undertaken. Maybe the ride up the Volcano was worse...but I was out of shape then. (The 4000 ft elevation sign did not come out very well.) 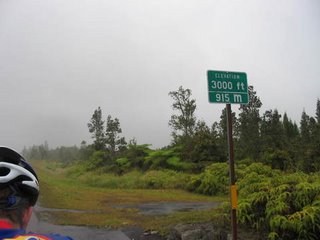 How about: I knew no good could have come of this when Michael said "let me take a picture of you next to that snake".

Let's hear it for Leslie Nielsen! An underappreciated method actor if there ever was one... And I think there has been at least one. So - he's most assuredly underappreciated. Ipso Facto, etcetera.

Surely one of you Thing Namers can come up with a caption for the snake photo...

...none that I would ever give to someone so obviously kind and generous as Jessica.

Oh... and look where www.thingnamer.com takes you!

Ooooh! I don't know you Mr.Tate but I that was very nice. Thank you for not thingnaming my picture!

I meant to say "that was very nice." Butterfingers.