"There's no downside to having a swan..."

I could not have made that quote up...actually I could have: I frequently tell Nico that there is no downside to getting a pelican. 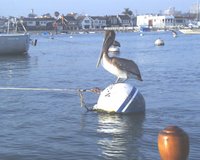 So anyway, if you don't feel like reading that fascinating article about Rupert, there's going to be a memorial service...for a swan. Also, some guy wants to buy a new pair of swans for the harbor. In other news, no memorial service has been announced for the dead Huntington Beach woman. And there was this brilliant quote from City Councilman (and former Mayor) Tod Ridgeway: "I just don't understand what's the hurry to get to a dead body...One, what was the hurry, and two, why didn't they avoid the swan?" Uhhm...I don't know, maybe because you need a coroner to prounounce a body dead, and until that happens it's a person floating in the water???

Even Sarah (lover of all things with feathers) thinks that Swans are vile things.

Now, if Nico wanted quail Sarah would be on board in a heartbeat.

Hey, you know Julie from the sailing day? She was there on the dock when they pulled the woman out! CRAZY. She was asking me about it.