What could be cooler than a Dick Dale concert on the beach? Sadly, after looking at the flier, I see we were at the wrong pier. Maybe next time. How old will Dick Dale be in 2106?

So back at the Newport Pier, Nicole and I tried to take a self portrait in front of the main stage. After about 10 tries each, here is the best we have: 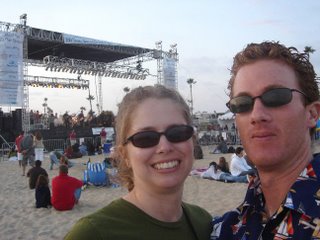 Perhaps it takes a certain level of narcissism, that Nico and I do not possess, to excel at taking self portraits.

Instead of Dick Dale, we stuck around for Sugar Ray. 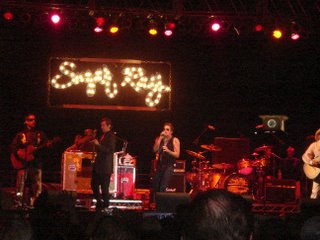 A fun game I like to play while watching Sugar Ray perform: "Count how many times Mark McGrath says he grew up in Newport Beach". It is possible that this game only works in the OC. At any rate I lost count after eight mentions...the game only lasted about six minutes. Interesting note: at the beginning of the concert, he distictly yelled: "Let me hear you, Long Beach". So I'm wondering: was this a mistake, a joke, or was the stretch of beach we were standing on called "Long Beach"? (The surfers have names for every section of beach in Newport--the Schoolyards, Blackie's, etc. I think the menu at Charlie's Chili has a map with all that local color. Anybody want to go to Charlie's Chili?)
Posted by Michael Lasko at 10/09/2006 06:54:00 AM