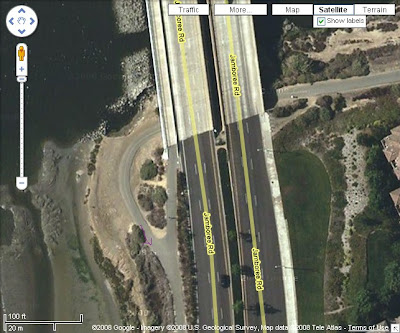 Nico and I were on our way home from a crepe run this morning when we were unfairly reprimanded for avoiding a 9 bicycle (give or take) accident.

We're the purple arrow in the picture above. We need to make a left at the fork to get home...it's not the easiest turn on a tandem even when there is no traffic, and today many other bicyclists were out enjoying the 42 degree air (actually, it was probably up to 50 for the ride home). From the left, I see at least 4 bicycles moving at considerable speed; one of them was another tandem. I didn't even bother looking right, as I knew there was no way I could make the turn ahead of these bikes. So we stopped. I was probably a foot from the right hand shoulder; I could have been a little farther over, but this was an unplanned stop. At this point, the other tandem decides to make a right (which again is a pretty difficult turn without traffic)...either their high speed, or our presence (still stopped) on the path causes them to do a rough dismount. (I say: "Nice paint" as their non-Santana appeared to be painted in the same shade of Dupont Shadeshifter as ours--my comments were ignored by the other tandem team). Before the path has cleared, 4 more bicycles come up from behind us. The last bike in line yells: "Tandem, you can't just stop there." I think he came closer to hitting one of his riding partners than us. I yelled back (a little too late): "I have to disagree".

After looking at the aerial shot, I've come to the conclusion that any bike coming from behind us should have seen us from 200 feet away. Does anyone reading this think I should have done something differently?
Posted by Michael Lasko at 12/14/2008 04:01:00 PM

Speaking as one who was there, I think there was nothing else to be done. I do believe that the group riding behind us was much too involved in their conversation to be paying attention to us, and they were at least 20 seconds behind us. Plenty of time to avoid.