1) Planned weekend ride down to San Diego a few days too early (when the forecast called for 80 degrees of sunshine).
2) Issued traffic citation for running a stop sign in San Clemente. Yes, I was riding a bicycle, and I got a ticket. I hear it's a $205 fine. (I shouldn't complain that much, as I probably ran 30 stop signs before that one).
3) Had to stop at every stop sign for the remaining 60 miles to San Diego.
4) Developed excruciating pain in knees.
5) Too cold for giant tortoises to come out of their barn.
5) Next day: Horrible wind on the return ride; 10 miles in the rain. Ran over glass; big hole in tire. Had to change tube in the rain. [Having had enough of Amtrak (see numerous other posts), and because the Coaster does not run on Sundays, we decided to ride halfway home (to Oceanside), then catch Metrolink.]
6) Call from work during otherwise uneventful train ride to Santa Ana. In case you are wondering, a tandem fits fabulously on a Metrolink train. Your only potential obstacle might be navigating the bike through the station(s)...this is not a problem in either Oceanside or Santa Ana.
7) Sidewall blowout in Santa Ana; no more tubes. Stoker hopped on bus home; I got bored and kept walking...for 5 miles until stoker reappeared with the car.

On the bright side, we rode pretty close to 150 miles over 2 days, which might be a record for us. Ran into Grant (sans stoker) from New Zealand at the edge of Camp Pendleton...and then Grant bought us breakfast. Thanks Grant! [To clarify, Grant is from Carlsbad, not New Zealand. We just happened to meet him last month in New Zealand. The photo below is from the historical archive--I believe that's a blurry Bill McCready off to the right.] 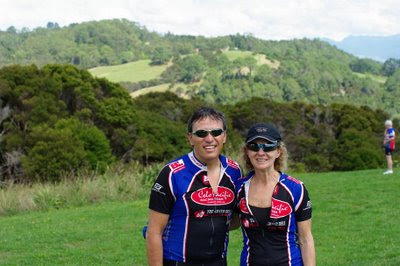