Thank G-d it's (Good) Friday, and the Official Sports Drink of Backyard Cricket.

In case I didn't mention it already, Easter is a four day weekend here. It is my new favourite holiday. As I type this, it is now Saturday...the sun is out, the birds are singing; or at least chirping their 4 note song (which I think is really a two tone song repeated twice, but Nico disagrees, and she is a bit more talented musically, so we'll go with 4 notes).

Yesterday, we spent the morning with my coworker Jason and his family on a hike through the Blowhard Bush Scenic Reserve. I was a little worried about the level of difficulty this hike might present because of our recent experiences on other voyages; but it turned out to be a relatively easy walk (through caves, native forest, and some plants that looked a lot like the California coastal sage scrub I had to identify in Biology 5C (or whatever class that was that made me decide not to be a botanist).

If you look closely, you may notice that I'm trying not to think about the bottomless abyss behind me. 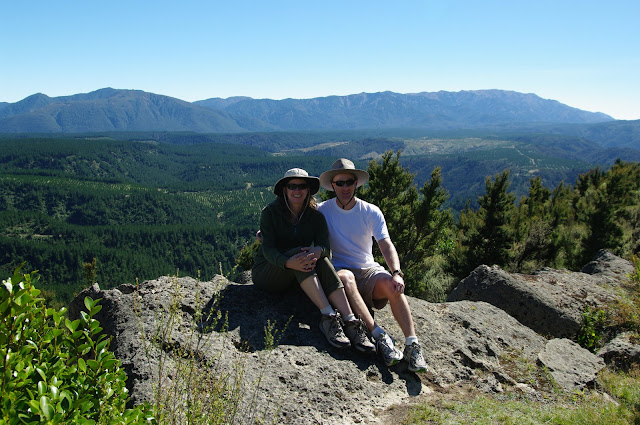 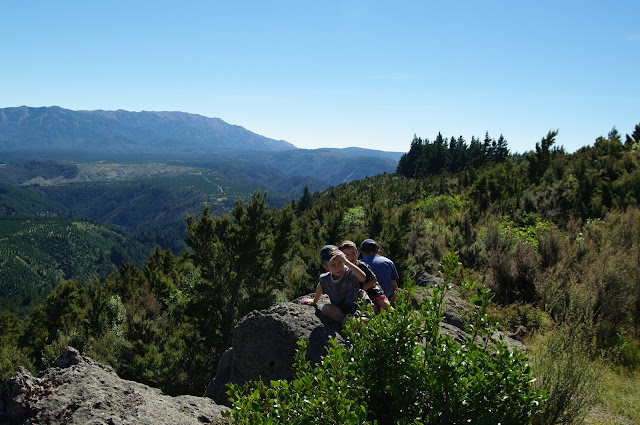 I somehow forgot to take pictures of the backyard cricket game we played in. Jason patiently went over the basics; I promptly forgot those I may have understood. Anyway, hitting a cricket ball is a bit easier than hitting a baseball.

Today, we're off to the Clearview Winery for lunch; I am happy to report that our first tandem ride since becoming Kiwis will be a sober one...not so sure about the second ride.

Tomorrow, it's Final Four. I am guessing that no Butler alumni live farther from Indianapolis than do I. So we broke down and had Sky installed. One month was a long time to go without TV. Unfortunately, the antiquated receiver would not work with our American television, so we had to go and buy a new one: 32 inch Samsung; cheap even by US standards. Due to a problem with online ordering (from a local store), I've ended up with two. It was so cheap, I'm thinking of keeping the second one. Is anyone not interested in us having a television in the guest bedroom?
Posted by Michael Lasko at 4/02/2010 11:34:00 AM

cheers mike and nicole - glad to hear you're getting that tandem over to the wineries - it had a kind of homing system for the tasting rooms in marlborough county.