He saves lives, he diffuses bombs, he fill prescriptions...

I was looking forward to writing a blurb about the Florida pharmacist who rescued a woman from certain death this morning. CNN interviewed him this morning, and the story went something like this:

1) Woman comes in with what she says is a bomb strapped to her body; her face is cut, and she claims a man with a knife outside is going to blow her up if she does not return with Lortab in 2 minutes.

2) The brave pharmacist instead calls 9-1-1, and stays with the woman until police arrive. A robot then cuts the bomb from the woman, and our hero pharmacist has saved the day.

As it turns out, the woman later confessed that there was no man with a knife, and she had taped a portable propane tank/pieces of a video game console to her body because she could not afford to pay for the Lortab.

Alas, still no positive pharmacist press. Just another day for the dope police. Meanwhile, do not be afraid of this woman: 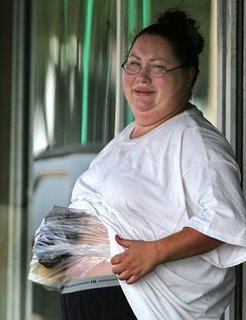